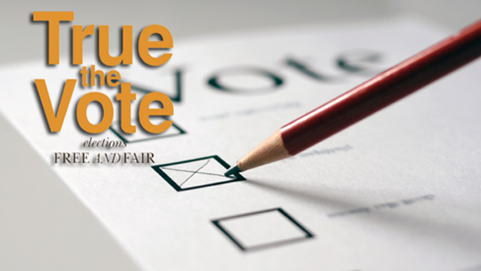 True the Vote has been waging a war on voter fraud across the country, empowering citizens to verify the integrity of the electoral process in their state, or in national races of interest.  They have been concentrating efforts of late in the state of Wisconsin, as Governor Scott Walker is facing recall due to his strong budget-balancing, anti-union monopoly on the economy stance.  It is an ongoing and uphill battle, with the Government Accountability Board of Wisconsin stating that they simply do not have the resources necessary to verify the petition signatures.  Signatures that the Board has concluded would be legal for such names as Mickey Mouse, and Adolf Hitler.


But it’s not just Walker who will be subjected to recall efforts, as other Republican officials have been petitioned as well.


Via True the Vote:

The integrity of Wisconsin elections is on the verge of implosion, as United Wisconsin’s coordinated effort to recall six Wisconsin officials has led to the submission of more than 1,000,000 petition signatures. In an effort to audit these signatures True the Vote is discovering significant errors, including duplicate signatures, incorrect addresses, and the like.

Please read the press release below and consider volunteering your support.  As we’re learning almost on a daily basis – protecting the integrity of the election process can only be done if the people still care about that process.

Obama – People Only Get Rich Because of the Federal Government