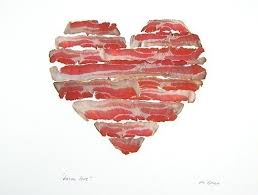 If loving bacon is wrong, then I don’t want to be right.

The Hate Crimes Division of the NYPD has been called in to investigate an incident at the New Dorp Beach field after bacon was found on the ground before a Ramadan service.

It’s being investigated as a hate crime — someone scattered pieces of bacon over the New Dorp Beach field where the borough’s Muslim community celebrated the end of Ramadan Sunday morning.

But that act of desecration failed to ruin what organizers described as a successful celebration — about 1,500 worshipers gathered at the John D’Amato Field at New Dorp Lane and Cedar Grove Avenue, unaware of the early morning police investigation that preceded the ceremony.

“Everything went smoothly,” said Dr. Mohamed Sadeia, president of the Muslim American Society on Staten Island, which organized the gathering. “The community is really not aware of it.

Dr. Sadiea was one of a handful of organizers who noticed the uncooked bacon on a small section of the field at about 8 a.m.

He said he contacted police, but kept the incident and investigation quiet, because he didn’t want to distress the adults and children gathering for morning prayers.

“They didn’t want to ruin the happiness of one of the only two holidays of the entire year,” said Hesham El-Meligy, the founder of the Islamic Civic Association-Staten Island, who said he didn’t attend the outdoor ceremony but had heard about the incident.

An police spokeswoman confirmed on Sunday that the NYPD’s Hate Crime Unit is investigating the incident.

Adherents of Islam are forbidden to eat pork.

Granted, if somebody did this knowing full-well that the religion of Islam forbids pork, then it is certainly a prank in poor taste.  But it hardly amounts to the level of a hate crime.

Especially in light of some cases in which Christians were targeted, and the assailants were not charged with hate crimes.

Examples of that include:

This brick assault on a Christian church.
High school basketball players assaulted for Tebowing.
More recently, the shooting at the Family Research Center, in which the Obama administration refused to consider the event a hate crime.

The above incidents could easily be considered more vile. But bacon on a field where Ramadan is being celebrated, while tasteless, is not hate.