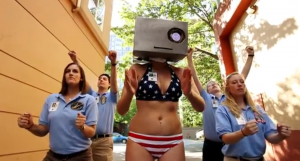 Who knew a Mars rover landing, a mohawk-sporting scientist, and a jar of peanuts could be so cool?

Well, the President did:

“It does sound like NASA has come a long way from the white shirt, black dark-rimmed glasses and the pocket protectors,” Obama said. “You guys are a little cooler than you used to be.”

And so apparently did a group called Satire, who capitalized on the success of NASA’s Curiosity rover mission to Mars to produce a parody of the hit song, “I’m Sexy and I Know It”.

The video for the song by LMFAO, “I’m Sexy and I Know It,” is either crude or crudely funny, depending on your tastes. But if your tastes runs toward the geeky, you’ll find this parody, “I’m NASA and I Know It” hilarious.

This video, from a group called Satire, pokes fun at the LMFAO song, as well as Bobak Ferdowsi, the mohawked NASA employee who was prominently displayed in NASA’s footage of the Mars Curiosity rover landing. With lyrics like, “When lookin’ for ice / gotta calibrate, gotta be precise,” plus actual footage of the landing, makes this song something we geeks can dance to.

Maxine Waters: Only Right-Wing Believes Burning the Flag is Unpatriotic

Are You a Racist? Watch This Video And Find Out