McEnany Hammers New York Times Over Russia Bounty Report: Give Back Your Pulitzer

Adam Schiff: ‘We May All Be Moving to Canada Soon’

Dan Crenshaw on 2020: Only One Party Will Teach Your Kids to Love America

(VIDEO) McEnany Snaps at Reporter Who Asks If Trump Believes ‘It Was a Good Thing the South Lost’ the Civil War?

Protesters Break Into Private Property … Then Armed Residents Fought Back 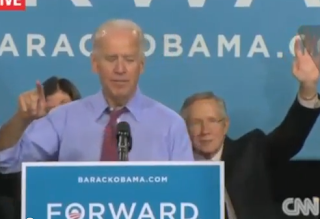 At a campaign stop in Las Vegas, Joe Biden asked people in the crowd how many of them know someone who has served in … Iran?

While most of us would have sat there in stunned silence, Harry Reid can be seen in the background raising his hand like a schoolboy dying to give the teacher an answer playstation 2 spieleen und brennen.

And guess what happens next … Joe asks another question – How many know someone who has been injured or lost in Iraq or Iran?  And Reid raises his hand again wo powerpoint kostenlos downloaden!

I wasn’t aware that we had any troops on the ground in Iran.  Thanks for the history lesson, Joe!