Rep. Debbie Wasserman Schultz threatened the chief of the U.S. Capitol Police with “consequences” for holding equipment that she says belongs to her in order to build a criminal case against a Pakistani staffer suspected of massive cybersecurity breaches involving funneling sensitive congressional data offsite.

The Florida lawmaker used her position on the committee that sets the police force’s budget to press its chief to relinquish the piece of evidence Thursday, in what could be considered using her authority to attempt to interfere with a criminal investigation.

The Capitol Police and outside agencies are pursuing Imran Awan, who has run technology for the Florida lawmaker since 2005 and was banned from the House network in February on suspicion of data breaches and theft.

“My understanding is the the Capitol Police is not able to confiscate Members’ equipment when the Member is not under investigation,” Wasserman Schultz said in the annual police budget hearing of the House Committee On Appropriations’ Legislative Branch Subcommittee.

“I think you’re violating the rules when you conduct your business that way and you should expect that there will be consequences,” Wasserman Schultz said. 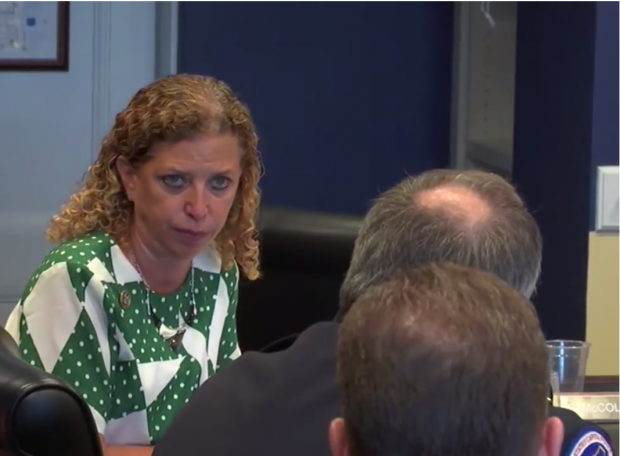 As one of eight members of the Committee on Appropriations’ Legislative Branch subcommittee, Wasserman Schultz is in charge of the budget of the police force that is investigating her staffer and how he managed to extract so much money and information from members.

In a highly unusual exchange, the Florida lawmaker uses a hearing on the Capitol Police’s annual budget to spend three minutes repeatedly trying to extract a promise from the chief that he will return a piece of evidence being used to build an active case.

“If a Member loses equipment and it is found by your staff and identified as that member’s equipment and the member is not associated with any case, it is supposed to be returned. Yes or no?” she said.

Police tell her it is important to “an ongoing investigation,” but presses for its return anyway.

A federal employee with knowledge of the situation and who requested anonymity, told The Daily News Foundation’s Investigative Group that as House authorities closed in on Imran Awan and his brothers, a laptop used by Imran was hidden in an unused crevice of the Rayburn House Office Building. Wasserman Schultz’s office is in Longworth House Office Building, a separate structure.

The laptop was later found by Capitol Police and seized because it was relevant to the criminal investigation, the source said.

The investigation is examining members’ data leaving the network and how Awan managed to get Members to place three relatives and a friend into largely no-show positions on their payrolls, billing $4 million since 2010. (RELATED: Suspects Could Read Every Email Congressmen Sent And Received)

The congresswoman characterizes the evidence as “belonging” to her and argues that therefore it cannot be seized unless Capitol Police tell her that she personally, as opposed to her staffer, is a target of the investigation. 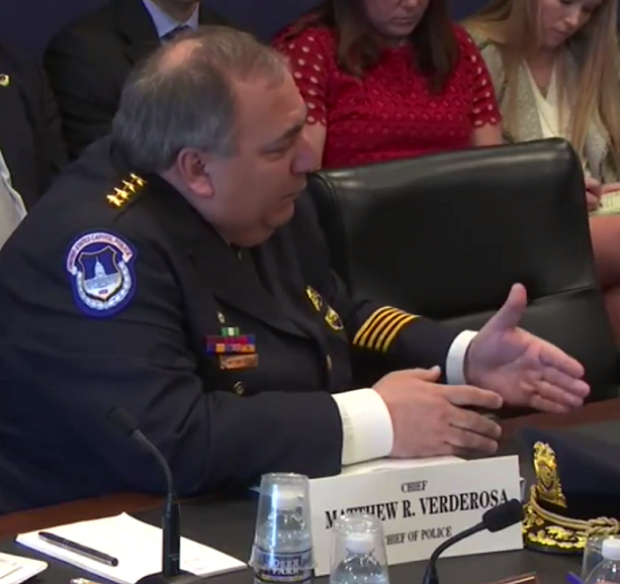 When TheDCNF asked Wasserman Schultz Monday if it could inquire about her strong desire for the laptop, she said “No, you may not.” After TheDCNF asked why she wouldn’t want the Capitol Police to have any evidence they may need to find and punish any hackers of government information, she abruptly turned around in the middle of a stairwell and retreated back to the office from which she had come.

Her spokesman, David Dameron, then emerged to say “We just don’t have any comment.”

Though on the surface Wasserman Schultz would have been a victim of Awan’s scam, she has inexplicably protected him, circumventing the network ban by re-titling him as an “adviser” instead of technology administrator.

Politico described him and his wife, Hina Alvi, as having a “friendly personal relationship” with both Wasserman Schultz and Rep. Gregory Meeks of New York.

That baffled a Democratic IT staffer, who said “I can’t imagine why she’d be that good of friends with a technology provider.”

“Usually if someone does bad stuff, an office is going to distance themselves” rather than incur political fallout for a mere staffer, he added. (RELATED: House IT Aides Fear Suspects Are Blackmailing Members With Their Own Data)

Wasserman Schultz resigned as Chairman of the Democratic National Committee in 2016 after Wikileaks published thousands of internal emails obtained by an as-yet unidentified hacker.

The last 30 seconds of the exchange can also be seen here.

DWS: I’d like to know how Capitol Police handle equipment that belongs to a member or staffer that’s been lost in the Capitol complex and found or recovered by one of your officers. What happens?

Chief: It’s processed on a PD-81 which is a property record, and depending on the property, depending on how you can legitimately determine ownership, it’s generally turned back over to the owner of a property. If it’s part of an ongoing case, then there are other things that have to occur for that to happen.

DWS: So if a member says there is equipment that has been lost, and you find it it would be returned to the member?

Chief: In a general sense, yes. You have to be able to positively identify the property and be able to establish ownership.

DWS: If ownership is established…

Chief: If it’s part of an ongoing case, then there are additional things that need to be done.

DWS: But if a member owns the equipment, and there is no ongoing case related to that member, then the equipment is supposed to be returned.

Chief: In a general sense, yes.

DWS: No, I mean in a specific sense. If the member loses the equipment, says they lose the equipment, and it is found by the Capitol Police, it is supposed to be returned.

Chief: If ownership has been established, it will be returned. If it’s subject to an ongoing investigation, there are additional things–

DWS: OK, but not an ongoing investigation related to that member. If the equipment belongs to the member, it has been lost, they say it’s been lost and it’s been identified as that member’s, then the Capitol Police are supposed to return it.

Chief: I can’t give a yes or no answer on that, because I know–

DWS: It’s a simple yes or no answer. If a member loses equipment and it is found by your staff and identified as that member’s equipment and the member is not associated with any case, it is supposed to be returned. Yes or no.

Chief: It depends on the circumstances.

DWS: I think you’re violating the rules when you conduct your business that way and you should expect that there will be consequences.

Sheriff Warns About Phase Two of the SAFE Act