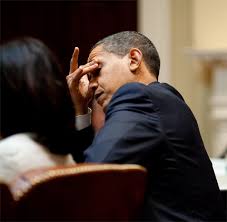 ABC’s White House correspondent Jake Tapper has reported that the love affair between the mainstream press and the President may be over – not for a lack of effort on the media’s part.

President Obama hasn’t formally taken questions from the White House press corps in more than two months, while on the campaign trail in Iowa yesterday he made time for reporters from People Magazine and Entertainment Tonight.

His last news conference was at the G20 in June, when he answered six questions from three reporters on the European debt crisis, the conflict in Syria, and the notion of politics stopping at the water’s edge.

The White House press corps has not formally been given the opportunity to ask questions of the president on U.S. soil since his appearance in the Briefing Room on June 8 (when he said “the private sector is doing fine.“)

His last formal White House news conference was on March 6.

So why has the President avoided the very people who ushered him into the White House in 2008?  Perhaps he is worried that a press conference would involve questions on the sputtering economy, or how he has raided Medicare, or the rising troop death toll in Afghanistan?  And with no control, the President instead propogates his rock star image by entertaining the tabloid journalists from People or Entertainment tonight.

It’s depressing to know that Mitt Romney has chosen an economic and budgetary wizard in Paul Ryan, and that this pick is lifting the Republicans in key swing states.

Or maybe it’s depressing to know that you might have to defend the man who serves as the counterpunch to Ryan – Joe Biden, a man who doesn’t know what state or century he is in.

Or maybe it’s this:  Your messaging is so far off course right now that Press Secretary Jay Carney had to resort to discussing the notion that the President has indeed eaten dogs…

Where is Devo on this topic?  I wonder if Seamus would rather be roof racked, bro, or sauteed.

Jay Carney on President Obama cracking a joke about dogs on top of cars: “I think he made one allusion in three different speeches that was a joke. Just like the Romney campaign campaign and others have joked about the fact that in the president’s memoir he talked about, as a boy, eating dog meat in Indonesia because that is something that is done there. I think a little levity is a little different from the kind of ridiculous charges that are being made here.