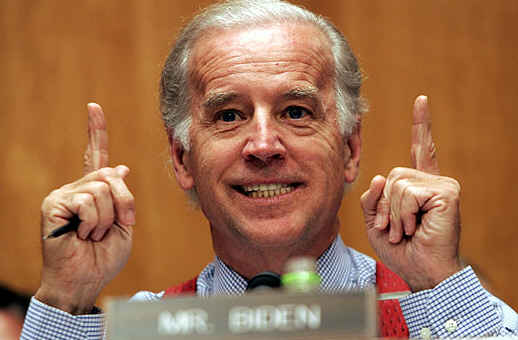 Hard to believe Osama bin Laden wanted this guy running the country because he’s “totally unprepared”.  At least he’s prepared for a second career in stand up at the local Chuckle Shack.

Yesterday, a reporter from the Irish Times responsible for the foreign press pool report of a breakfast with Joe Biden and Irish prime minister Enda Kenny noted that the “[vice president of the United States] seems to have an inexhaustible supply of Irish sayings.” But it wasn’t just Irish sayings–Biden also threw in a dirty joke at the official White House reception.

And now, here’s the guy who is next in line to the Presidency – joking about ‘lubrication’.

For those without video capabilities, here is a transcript from the Standard:

“You know there’s and old Irish saying,” Biden said. “There’s all kinds of old Irish sayings. (Laughter.) At least my Grandfather Finnegan, I think he made them up, but it says, may the hinges of our friendship never go rusty.  Well, with these two folks that you’re about to meet, if you haven’t already, there’s no doubt about them staying oiled and lubricated here. Ladies and gentlemen — (laughter) — now, for you who are not full Irish in this room, lubricating has a different meaning for us all.”

Ladies and gentlemen, the vice president of the United States!

Romney: Labor Day a Day of “Worrying When the Next Paycheck Will Come”