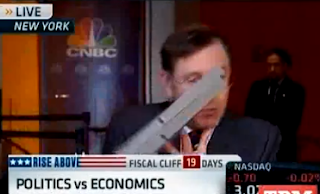 Former economic adviser to Mitt Romney, Glenn Hubbard, was on the set of a CNBC show this morning discussing entitlements, when a banner from the set came a-tumblin’ down.

Glenn Hubbard, appearing live on CNBC Wednesday morning, was struck by a falling piece of the set. Hubbard, who was the chairman of President George W. Bush’s Council of Economic Advisers and an economic adviser to Republican presidential candidate Mitt Romney, was discussing the need for Congress to address the forthcoming entitlement crisis when a banner fell and hit him on the head.

Hubbard was unfazed, stating afterward that he was “fine.”

“That’s what happens when you criticize the welfare state,” he deadpanned.

No doubt MSNBC is actively preparing a report furthering the conspiracy theory that Hubbard actually hit himself with the banner.
Tags
Mitt Romney MSNBC