The vetting of Obama, something that should have been done in 2008, continues.  This time, with video of what may be a young Michelle Obama taking part in a protest on behalf of race-extremist, Professor Derrick Bell.  The purpose of the Occupy-like sit-in is in advocating the very definition of racism – they were demanding that the Harvard Law School hire professors based on race.

A treasure trove of information is coming out regarding Barack Obama’s time in college. Over at the Breitbart sites, we are learning how Obama inserted himself into a fight to implement hiring on the basis of race at Harvard Law School. The Obama tapes also seem to show the other Obama – Michelle – occupying the Harvard Law School dean’s office. The occupiers were agitating for the race-based hiring of Harvard law professors.

The racialist fight at Harvard Law from 1988 to 1991 swirls around Professor Derrick Bell. As detailed over at Big Government, Professor Bell was a role model to law student Barack Obama. But he also openly advocated for a variety of racialist views wholly outside the American mainstream. Some of them are outright crazy. He deliberately used his position as a professor to teach racially charged theories of structural oppression by whites. Obama, nevertheless, now famously urged us “to open up our hearts and minds to the words of Professor Derrick Bell.”

Author of the post, J. Christian Adams, claims to have viewed the Betamax (higher quality) version of the tapes that he says ‘leave little doubt’ that they show Michelle Obama.  What exactly do they show?

In May 1988, Harvard Law students, borrowing from Alinsky’s Rules for Radicals, and foreshadowing the Occupy movement of 2011, occupied the Harvard Law School’s dean’s office. The students were supporting Professor Derrick Bell’s demand that the law school hire professors on the basis of race.

One of the students “dressed in black” and occupying the dean’s office appears to be Michelle Obama (Harvard Law ’88).

Here is a link to the internet version of the video.

Another brick in the wall that shows the Obamas palling around, and advocating for, radicals. 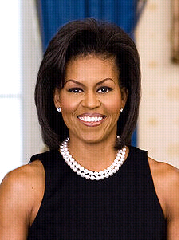