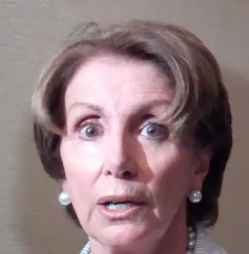 Earlier this morning, we alerted you to a report that the Democrat Party Chair from California, John Burton, compared Paul Ryan and the GOP to Nazi propagandist Joseph Goebbels.

From the Chronicle (who will be posting audio shortly):

Greetings from the California delegation breakfast at the DNC where before he had a cup of coffee Democratic Party Chair John Burton – much like his ol’ pal Guv Jerry Brown once did – just compared the Republicans to Nazi propagandist Joseph Goebbels, for “telling the big lie,” a reference to several falsehoods GOP VP nominee Paul Ryan recently told.

“They lie and they don’t care if people think they lie… Joseph Goebbels – it’s the big lie, you keep repeating it,” Burton said Monday before the Blake Hotel breakfast. He said Ryan told “a bold-faced lie and he doesn’t care that it was a lie. That was Goebbels, the big lie.”

The San Francisco Chronicle of all places has done a very good job of covering the story.  And now they’ve included a new video update with Burton and Nancy Pelosi standing side by side, in which the reporter asks Pelosi flat-out if she agrees with the Nazi reference.

Pelosi then goes on a brief tap-dancing session in which she doesn’t disavow Burton’s comments, but reiterates the statement that led to the comparison – that essentially Paul Ryan is lying.  She calls them ‘factual misrepresentations’ and instead of condemning the Nazi rhetoric, she makes some absurd comment about Republicans having “endless money to sell any misrepresentation to the American people”.