Allen West recently held a townhall meeting at the Mae Volen senior center in Boca Raton.  Despite the seemingly peaceful setting, a few overzealous protesters repeatedly attacked the Florida congressman during the audience question period.  And the liberals, as they often do, crossed the line (video below).

Things seemed to be relatively under control.  Some of the protesters were escorted out of the meeting before its completion due to their behavior, while others stuck around to harass the Congressman afterward.

One woman started arguing her point for gay marriage – perfectly fine in and of itself – but her delivery was a might bit crass, prompting security to step in.  Rather than accepting the point that the crowd was approaching uncalled-for obnoxious levels, the progressives began referring to the security team as stormtroopers and accusing them of “Gestapo-like” behavior.

At some point, West is surrounded by what he calls his “liberal groupies”, but vows that “I’m going to stand right here.”   That’s when they begin to press on even further.

As Doug Ross reports, some of the World War II vets in attendance try to stand up for West as the protesters continue pressing and trying to hurl insults his way.

Instead of honoring their service, the liberals go after these heroes, to the point of putting hands on one while dropping the f-bomb on him.

Because that’s the way liberals roll, don’t ya know?

This image (courtesy of Ross) shows a bit of the scuffle… 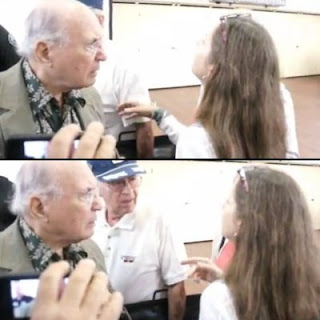 The woman clearly didn’t like where the conversation was headed, as others were pointing out that she is simply over her head when trying to argue her points.  She then refers to one of the veterans as an obnoxious little man, prompting laughter from others in the crowd who ask, “a guy who fought in World Wars?”
That’s when the woman gives another veteran a swat on the arm and a hearty, “f*** you”.
‘Cause when the argument doesn’t go your way, let it disintegrate into your normal level of 5th-grade discourse.  How progressive.
These people have very little regard for veterans.  They know little in the way of history, and know even less about how they live in the only country in the world that allows them to voice their opinions in the first place. And they rarely know when they’ve crossed the line.
Placing your hands on a World War II vet and telling him f*** you is just another example of this.
Remember when Newsweek and the rest of the mainstream media were making a note about all the heated arguments turning up at townhall meetings over health care, highlighting the vociferous Tea Party protester and their angry faces?
Let’s see if we get a feature on the angry liberal face…
Tags
Allen West Democrats Florida Liberals Veterans

Who Better to Lead Us to Energy Independence Than Abraham Lincoln?