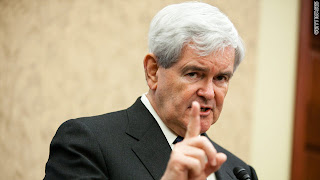 Newt Gingrich is on fire right now, and the liberal elite media had better watch out.

At tonight’s debate in South Carolina, John King made the unfortunate mistake of leading off with a tabloid level question.  A question I might add, that nobody ever asked John Edwards when he was being outed for having an affair.  We’re still wondering about President Obama’s character flaws – 3 years into his term – including relationships with Jeremiah Wright, Bill Ayers, Tony Rezko, college transcripts, law degrees, etc.  We’re still begging for more information from the ‘most transparent administration in history’ on such current scandals as Fast and Furious, Solyndra, CH2M Hill, etc.

But an ex-wife from twenty years ago? Now that’s worthy of coverage.

Why are they so willing to go after Gingrich?  He has an “R” in front of his name.

Talk about a scolding.

Republican presidential candidate Newt Gingrich slammed CNN’s John King for starting Thursday’s presidential debate with a question to him about his ex-wife’s recent claims that he requested an “open” marriage that would allow him to have a girlfriend on the side.

Asked by King if he’d like to explain his side, Gingrich coldly responded, “No.”The former House speaker then went on to blast the “destructive, vicious, negative nature of much of the news media.”

“I’m frankly astounded that CNN would take a question like that and use it to open a presidential debate,” Gingrich said to King.

One correction I’d like to add is that last line, in which Gingrich actually said “I’m frankly astounded that CNN would take trash like that…”

It actually gets better when Gingrich tosses out an additional jab at the media for their blatant bias in reporting Republicans or reporting President Obama.

“I am tired of the elite media protecting Barack Obama by attacking Republicans.”

The other candidates rallied around Gingrich as well, with Romney essentially telling King to stick to the issues.