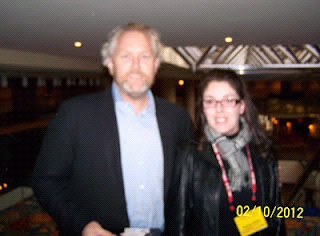 Stunned.  So very stunned and saddened.  An absolutely crushing blow.

It is difficult to write with a feeling of having been kicked in the gut, but it’s the only thing I can think to do right now.

In just his early forties, media crusader, common sense conservative, and friend to many, Andrew Breitbart, has passed away.

The first time I ever ‘spoke’ to Andrew was in a chat on Facebook, when I asked if he were looking for any new writers at Big Government.  I didn’t expect a response, yet he quickly got me in touch with the editors and we were off and running.

When his book, Righteous Indignation came out, I shot Andrew an e-mail asking if we could do an interview.  Again, I figured he was being inundated with a myriad of requests, so I wasn’t holding my breath.  Within minutes he had texted me his cell phone number.

Throughout these last few months, we’ve had a chance to discuss voter fraud, the Occupy movement, and other political stories which were run through the stable of Andrew’s ‘Big’ sites.

The point being, the fact that a man of his stature was willing to give someone like me the time of day, showed the kind of character Andrew exhibited.  I can only imagine the greatness that those close to him knew and saw on a daily basis.

After my wife had a chance to meet Andrew Breitbart, and we both had the opportunity to watch his speech at CPAC this year, I wrote the following:

Breitbart says what a lot of people think in regards to liberals, the mainstream media, and the Occupy movement, but don’t have the courage to say.

Whatever you might think of Andrew, he lived his life and championed his cause full throttle.  His life was something we could all learn by.

With a terrible feeling of pain and loss we announce the passing of Andrew Breitbart.Andrew passed away unexpectedly from natural causes shortly after midnight this morning in Los Angeles.

We have lost a husband, a father, a son, a brother, a dear friend, a patriot and a happy warrior.

Andrew lived boldly, so that we more timid souls would dare to live freely and fully, and fight for the fragile liberty he showed us how to love.

Andrew is at rest, yet the happy warrior lives on, in each of us..

It would be easy to say ‘Rest in Peace, Andrew’ but there’s just no way he would want that.

Thanks so much to Benny Johnson and Accuracy in Media for the video tribute.

Bill Maher on Obama: ‘Looked Like He Took My Million and Spent It All on Weed’

DNC Opening Video: “Government is the Only Thing We All belong To”

Newsweek Calls Romney a Wimp, Seemingly Forgetting Who is Currently in Office