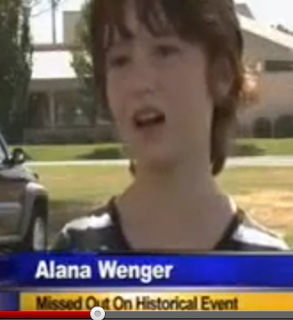 A couple of nights ago, an 8-year-old girl with Asperger’s syndrome and her father tried to get into an Obama campaign event to see the President.  As a reporter from KJCT in Colorado explains, that little girl’s dreams were crushed.

The problem started when Obama, who is notorious for showing up late to events, actually began his speech an hour early, finishing before he was even scheduled to begin.

Because of Alana Wenger’s health issues, warm weather can be difficult for her to cope with, prompting her father to wait a little later to stand in line for the event.  By then, the President was speaking and the doors had been closed.

Upon arriving at the security entrance, the two were denied entry without explanation as to why.

Worse, after the denial, a “prominent” Democrat was whisked right into the event, despite the Secret Service saying that “nobody” would be allowed entry due to security risks.

The report (seen below) starts with this statement: