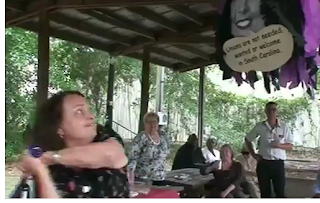 When Sarah Palin was being blamed for the Gabby Giffords shooting by liberals citing her targeted election maps, there was a renewed call for civil discourse in our country.

The incident prompted President Obama to deliver a speech which had been described as “calm amid the toxic rhetoric”.

There were calls for a “new tone” in politics.

This must have been what he had in mind…

Donna DeWitt, head of the South Carolina chapter of the AFL-CIO, repeatedly blasting an effigy of Governor Nikki Haley with a baseball bat, while union thugs are heard in the background screaming for her to “hit it again”, “wait ’til her face comes around and whack her”, and commenting on how Haley “is a tough old bitch”.

The video has been downloaded and posted below, since the national office of the AFL-CIO is trying to have it removed.

Via the Columbia Free Times:

A video posted online that shows a former union leader in South Carolina smashing a piñata effigy of Gov. Nikki Haley has riled the national office of the AFL-CIO, which wants it taken down.

“Do you think we can get this video pulled,” asked a national AFL-CIO official in an email to Palmetto State union sources.

The author of the email also worried the video might get “picked up by tea partiers, maybe even Haley herself, to attack labor again.”

The video in question features former AFL-CIO of South Carolina president Donna DeWitt smacking a Haley piñata with a baseball bat at DeWitt’s retirement party over the weekend.

It is accompanied with text under the video that reads in part, “Gov. Nikki Haley has been vicious to organized labor in South Carolina, saying in her State of the State address that ‘unions are not needed, wanted or welcome.’ After years of being treated like a union thug, Donna Dewitt gets sweet revenge at a reception in her honor.”

You likely won’t see this in the media, so our question is, under what scenarios would this lead to media coverage?  If the woman pictured on the pinata was a democrat, say Nancy Pelosi – maybe.  If the person pictured was an African-American democrat, as opposed to an Indian-American Republican (or a Sikh Jesus as her opponents like to call her) – likely.  If the person pictured was President Obama – definitely.
New tone for me, but not for thee.
Tags
Nancy Pelosi

Poll Results: Who Do You Trust More With the Economy? You Won’t Believe the Results