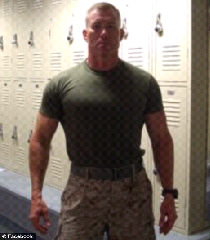 And this, ladies and gentleman, is just another demonstration of how United States Marines are BAD ASS.

A U.S. Marine officer has told the incredible story of how he survived a street robbery by plugging bullet holes in his body with his fingers.


Lieutenant Colonel Karl Trenker, 29, of Miramar, Florida, was shot three times as he confronted two men who had stolen a gold chain from him.


He said he used his battlefield training from Afghanistan and Iraq to stem blood from chest wounds by shoving his finger into the gaping wound.

‘I put my fingers in the holes to stop the bleeding and ran back to the truck and told my kids I had been shot, but not to worry.’


The armed assailants have been arrested and now face attempted murder charges.

Lieutenant Colonel Karl Trenker – Calm in the face of fire…