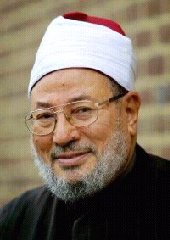 U.N. Secretary-General Ban Ki-moon sent his Mideast envoy to deliver a message on his behalf to a conference in Qatar this week whose aims include “pointing out the weaknesses of the Jew’s historical arguments backing their claims” to Jerusalem.

Co-hosted by the Qatar government and the Arab League, the two-day “International Conference for the Defense of Jerusalem” brought together politicians from across the Arab and Muslim world, representatives of pro-Palestinian organizations, clerics and academics.

Participants included Yusuf al-Qaradawi, an influential Sunni cleric regarded as the spiritual leader of the Muslim Brotherhood, who has drawn criticism for comments about Palestinian suicide bombings.

Also of note is a report I did on Qaradawi back in 2010, when he was being cited as a source of inspiration for the Ground Zero imam.

And speaking of the fatwa advising Muslims in the U.S. military that it was okay to fight the Taliban …

The renowned Islamic scholar that Rauf is referring to is Sheik Yusuf al-Qaradawi. In a New York Times article one month after 9/11, Rauf was quoted as saying:

“This fatwa is very significant. Yusuf Qaradawi is probably the most well-known legal authority in the whole Muslim world today.”

Question is, was that hollow fatwa (a hotwa as it were) more significant than Qaradawi’s proclamation on Al Jazeera two weeks earlier?

Qaradawi stated: “A Muslim is forbidden from entering into an alliance with a non-Muslim against another Muslim.” He called on Muslims to “fight the American military if we can, and if we cannot, we should fight the U.S. economically and politically.”

Qaradawi elaborated on that non-fatwa fatwa in 2004 when he said of American troops:

“…all of the Americans in Iraq are combatants, there is no difference between civilians and soldiers, and one should fight them, since the American civilians came to Iraq in order to serve the occupation. The abduction and killing of Americans in Iraq is a [religious] obligation so as to cause them to leave Iraq immediately. The mutilation of corpses [however] is forbidden in Islam.”

Abduction and killing is an obligation, but he draws the line at corpse mutilation. Very classy.

Another moderate, in the eyes of the U.N.

Why do we continue to house U.N. headquarters on American soil?