President Trump is giving his salary away to charity, and he’s letting his adversaries in the mainstream media pick who will be the beneficiary!

“I won’t take even one dollar,” Trump declared on the campaign trail in September. “I am totally giving up my salary if I become president.”

White House Press Secretary Sean Spicer revealed that the President plans to let the media pick which charity will receive the $400,000 salary.

“The president’s intention is to donate his salary at the end of the year. He kindly asked that you all help determine where that goes,” Spicer said.

Spicer tackled the issue when asked Monday, at his daily press briefing, if Trump had donated his salary for the month of February. Spicer said that Trump’s intention was to donate his salary at the end of the year, and added an extra surprise for the press corps.

“The president’s intention right now is to donate his salary at the end of the year and he has kindly asked that you should all help him determine where that goes,” he said.

The reason he’s letting the press make the call is brilliant.

“The way that we can avoid scrutiny is let the press corps determine where it should go,” Spicer explained.

There is no doubt that wherever Trump donated his salary, the media would be quick to criticize for one reason or another. But now, problem solved!

Case in point – Check out this headline from Good Morning America which rips the President for donating his salary to charity because it means he allegedly broke a campaign promise! 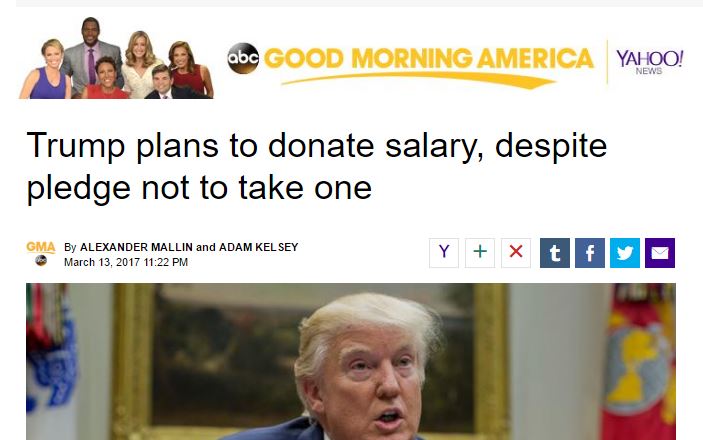 The man has to take a salary as stated in Article II of the Constitution, but as he pledged, he’s giving it away to a worthy charity and not personally receiving a dollar.

The media still finds a way to criticize him. Unbelievable.

On His Deathbed, This Man Sacrificed Everything He Believed In

Trump Fights Back: Claims Media Partly Responsible For ‘Anger and Rage’ in this Country

What One Thing Was Spotted Outside the White House That Proves America Will Be Great Again?