At first blush, this might seem like a gratuitous post.  A post designed to lure in readers with its over the top rhetoric and a forced analysis of a ridiculous and fictitious scenario. A sensationalizing of the campaign battle by literally determining who could win a knock down, drag ’em out fight.

And you’d be right.  (We need readers)

But it’s also a response to a recent poll conducted by the Yahoo!/Esquire Langer group in which, for some reason they decided to ask likely voters which of the two candidates would win in a fistfight.

It wasn’t even a close contest: 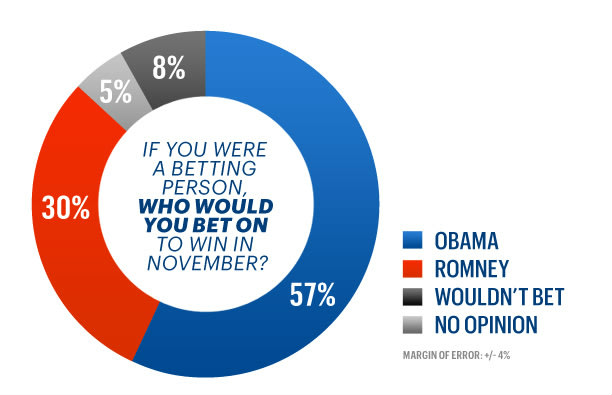 Well we’re here to tell you exactly why you should be betting on the underdog in this fight.  Romney would take Obama in a schoolyard brawl in a New York minute.
Here’s the top five reasons why…
5)  Media Complains Romney Too Tough
Even the media agrees, when it comes to dealing with dictators trying to build a nuclear weapons program, Mitt Romney is the one candidate who delivers the beat down.  During a weekend-long visit to Israel in July, media outlets were in awe of Romney’s toughness.  Here is a sampling:

Reuters:  Romney talks tough on Iran during visit to Israel

Meanwhile, Jennifer Rubin of the Washington Post writes that Obama’s weak policies, and his ‘sloth and foolishness’ could lead to a nuclear-armed Iran.

Smacking down the world’s dictators?  Plus one for Romney…

4)  Obama’s First Documented Fight – A Schoolgirl
In his book, Dreams From My Father, Barack Obama admits to having to get all rough and tumble with a school girl classmate of his.  Seems teasing that she may have been a girlfriend of Obama’s was too much to bear, so the future President did the only thing he could – he roughed her up.

“Before my arrival she had been the only black person in our grade. She was plump and dark and didn’t seem to have many friends. I ran up to Coretta and gave her a slight shove. She staggered back and looked up at me, but still said nothing. ‘Leave me alone,’ I shouted again. And suddenly Coretta was running, faster and faster until she disappeared from sight. Appreciative laughs rose around me.

While this in itself might not give an advantage to Romney, it certainly takes away from the President’s street cred.  Having to resort to bullying little girls never appears tough.

Nothing says rugged individual quite like showing up on a professional baseball diamond sporting an outfit featuring mom jeans, and a throwing motion that looks like this:

I’m not actually sure which is worse for his tough guy image, the jeans or the fact that his throwing motion looks eerily similar to this… 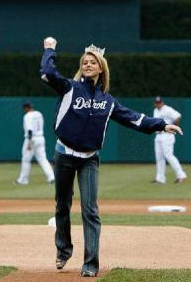 2)  Even the First Lady is in Better Shape Than Barack
When it comes to a training regimen for preparing for the fight, the President is noticeably lacking in discipline.  In an interview with People Magazine, Michelle Obama reveals that she and Barack don’t take themselves too seriously at the gym, each whining about doing their push-ups, each trying to get out of them.
Then there was this statement by the First Lady:

When asked if they compete athletically, she replies: ‘Not anymore, because I’m in way better shape than he is.’

Well, that would explain how she managed to get him to hang the curtains in the White House…

1)  Mitt Romney Takes Down Hip Hop Artist
When it comes to a fistfight, Governor Romney might have the ultimate secret weapon – the vulcan death grip.  Lest we forget this altercation in 2010:
Mitt Romney was involved in a physical altercation with rapper Sky Blu aboard an Air Canada flight heading from Vancouver to Los Angeles. While the Republican’s spokesman claimed that Romney had been assaulted by a hostile passenger, the rapper (whose real name is Skyler Gordy) claimed he was actually the victim.  Gordy, a member of the group LMFAO (of I’m Sexy and I Know It fame) said, “He put a condor grip on me – what am I supposed to do?”  His band-mate chimed in with, “that’s like a Vulcan grip.”

Granted, rappers using the phrases ‘condor’ or ‘vulcan grip’ may call into question their own street cred, the fact remains that Romney has this move in his arsenal – and he’s not afraid to use it.

All in all, Mitt Romney clearly has the chops to take down President Obama.  And if the above list isn’t enough to convince you, we provide this visual representation… 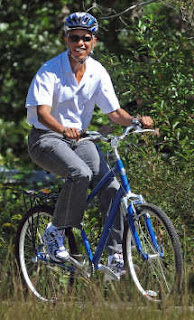 We don’t think Romney’s going to be losing any sleep over this one.
Tags
Michelle Obama Mitt Romney President Obama

Video of Michelle Obama as a Young Harvard Occupier?