Earlier today, reports started circulating about a replacement being named for departing Senator Jim Demint.  Those reports became official when South Carolina Governor Nikki Haley announced that Tim Scott would become the only African-American serving in the Senate.

Gov. Nikki Haley of South Carolina has chosen Representative Tim Scott to replace Jim DeMint in the United States Senate, according to three Republican officials. The move will make Mr. Scott the first black senator from the South since the late 19th century.

The governor will make the announcement at noon at the State House in Columbia. She began informing the roster of finalists on Monday morning about her decision to go with Mr. Scott, who was the preferred candidate of many conservative leaders and groups in Washington.

How about that?  The Republican Party who, if you listen to MSNBC, hate women and minorities, will be sending a southern, African-American to the Senate for the first time since the late 19th century.  And he is being named to the position by a female Indian-American governor.  Liberals must simply be apoplectic trying to spin this one.

That hasn’t stopped some from playing the race card anyway.

Amos Brown, a local liberal radio host in Indianapolis had this to say about the selection: 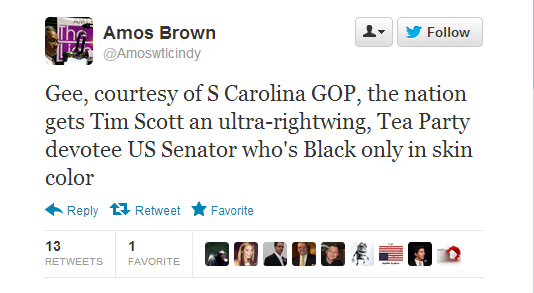 Black only in skin color.
Shane at Caffeinated Thoughts writes:

News of Congressman Scott’s appointment and the historical significance of it was met by vitriol by a black radio host, Amos Brown, in Indianapolis.

Brown hosts Afternoons with Amos on 1310 AM The Light in Indianapolis, IN.  This is just a sample of some unfortunate reactions Senator-Designate Scott will receive from the left.

And on cue, Twitchy has a rundown of liberals on Twitter referring to Scott as a “token negro” or an “uncle Ruckus”.

Just more proof that the left only supports minorities if they adhere to their far-left agenda.  They can not process a black Tea Party conservative in their small-world minds.

MenRec Poll: Who Should Be Romney’s VP Choice?

Video: Proof That Terrorists Can Get Anything Past TSA’s Body Scanners