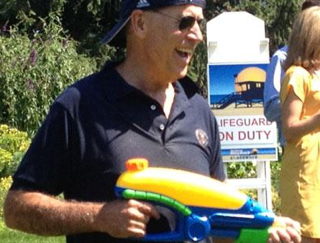 Last week, New York governor Andrew Cuomo created quite a stir when he offered up suggestions on implementing new gun control laws, including confiscation and/or forced buyback.
Now, an activist in California is taking things to a new level, finally providing a truly hardline stance against guns – toy guns.
Jerry Rubin is suggesting a toy gun buyback program of his own.  It was an idea that started back in 1987, and he believes it needs to be reinstituted in the wake of the Newtown massacre.
That’s right, your child’s Nerf guns and Super Soakers could lead to mass killings in their adult life … or something.
Rubin tells the Associated Press that he used to exchange teddy bears with children who turned over their toy guns, but the teddy bear supply dried up.
Now however, he is willing to provide the children with “a personalized merit award”.
That’s right kids, if you’re one of the lucky ones willing to give up your Nerf gun, then you will be rewarded with an oft sought after written ‘atta boy’ from some man you’ve never heard of before.  How’s that for a selling point?
The program will no doubt get those ever-dangerous toy guns off the street.  No telling what harm could be done by sugared-up kids blasting each other with foam darts.  The horror!
If we’re serious about this program, will vice-President Joe Biden be willing to give up his Super Soaker summer picnics?  Is this not promoting violence?
Tags
California Gun Control Joe Biden

Hell of a Day, Humanity