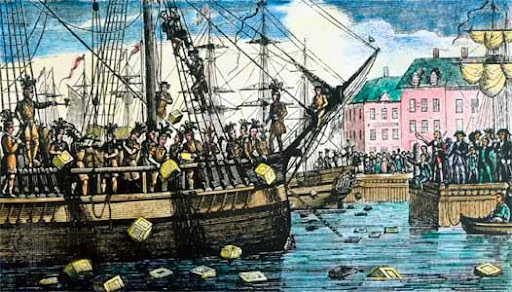 Liberal academia?  Revisionist history?  Nothing to see here, move it along people…

The most historical instance of protesting against taxation without representation is now being taught in Texas schools as a terrorist act.

As recently as January of this year, the Texas Education Service Center Curriculum Collaborative included a lesson plan that depicted the Boston Tea Party, an event that helped ignite the American Revolution, as an act of terrorism. TheBlaze reports that in a lesson promoted on the TESCCC site as recently as January, a world history/social studies class plan depicted the Boston Tea Party as being anything but patriotic, causing many people to become upset with the lack of transparency and review for lessons.

“A local militia, believed to be a terrorist organization, attacked the property of private citizens today at our nation’s busiest port,” wrote the teachers in charge of organizing the curriculum about the Boston Tea Party. “Although no one was injured in the attack, a large quantity of merchandise, considered to be valuable to its owners and loathsome to the perpetrators, was destroyed. The terrorists, dressed in disguise and apparently intoxicated, were able to escape into the night with the help of local citizens who harbor these fugitives and conceal their identities from the authorities.

Are You Kidding? Guantanamo Inmates Get New $750,000 Soccer Field