After delivering a punishing attack on the Syrian government for allegedly using chemical weapons, President Trump has earned a new nickname among supportive Syrians – ‘Abu Ivanka al-Amriki’ or “Father of Ivanka, the American.”

The term is meant as one of endearment, with various social media posts showing Trump with the words ‘we love you,’ as well as some who are naming their restaurant, or even their children, after the President.

One Syrian tells me the new nom de guerre for President Trump on the ground in Northern Syria is Abu Ivanka al Amriki. #syria

From today and forward his name is:
ABU IVANKA AL-AMRIKI pic.twitter.com/e0GwPxaNHi

Social media users across the Arab world praised Donald Trump for his missile strike on Syrian government forces on Friday, even giving him an affectionate new nickname.

Users have started referring to President Trump as Abu Ivanka – meaning father of Ivanka, as a sign of respect and endearment.

Others used the name Abu Ivanka al-Amriki – Father of Ivanka the American as they heralded him a champion of the rebellion in Syria.

One even photoshopped a fez on the president’s head with the words: “We love you” in Arabic. 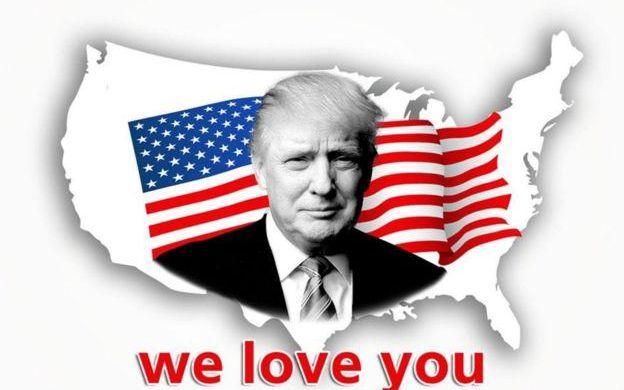 Incidentally, Eric Trump has revealed recently that First Daughter Ivanka may have helped persuade him to carry out the Tomahawk missile assault on a Syrian airfield.

So it’s little wonder that Syrians are celebrating the ‘Father of Ivanka.’

By contrast, a Reuters report in 2013 indicated the Arab world had similarly given former President Obama a new nickname, ‘Abu Hussein.’

In that report, one man used the nickname and described Obama thusly – “Abu Hussein has no balls.”

Compare that to Najim Hassan, who lives in Syria, who commented on the love of Trump in his location.

“Maybe you in the West hate Trump, but he has already done far more for us than Obama,” said Hassan. “We love him because he does more than he says, he’s a man of action and at least he gives us something to hope for.”

Something to hope for, finally, after 8 years of of false hope from ‘Abu Hussein.’

Do you support Trump’s handling of the Syria conflict? What would you nickname him? Share your thoughts below.

Tucker Battles Dem Candidate on Gun Control: ‘You Don’t Know What You Are Talking About!’