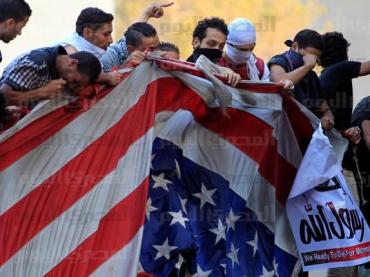 This absolutely can not be true.  If even a sliver of it is however, multiple people need to be fired effective immediately.

U.S. Marines defending the American embassy in Egypt were not permitted by the State Department to carry live ammunition, limiting their ability to respond to attacks like those this week on the U.S. consulate in Cairo.

Ambassador to Egypt Anne Patterson “did not permit US Marine guards to carry live ammunition,” according to multiple reports on U.S. Marine Corps blog spotted by Nightwatch. “She neutralized any US military capability that was dedicated to preserve her life and protect the US Embassy.”

If true, the reports indicate that Patterson shirked her obligation to protect U.S. interests, Nightwatch states.

“She did not defend US sovereign territory and betrayed her oath of office,” the report states. “She neutered the Marines posted to defend the embassy, trusting the Egyptians over the Marines.”

That is beyond abhorrent if true.

While the media continues to focus on Mitt Romney’s statements regarding the disgraceful respon to the attacks by the Obama administration, keep this in mind – the President may be putting the security and safety of U.S. citizens in the hands of the Muslim Brotherhood-backed Egyptian security teams over the United States Marines.

Report: 20 Million Could Lose Their Current Coverage Under Obamacare