Maybe it wasn’t sexism after all.

While radical leftists and extreme feminist women protest Donald Trump endlessly, a new study indicates that one of the main reasons Hillary Clinton lost her 2016 presidential bid was due to the fact she ran political ads that were severely lacking in substance.

Conducted by the Wesleyan Media Project, the report indicates a mere 25% of Clinton’s ads were focused on policy, while another 60% zeroed in on personal characteristics. In other words, she played divisive identity politics, and the American people were sick of it.

Via the Free Beacon:

Hillary Clinton’s 2016 campaign ran television advertisements more “devoid of policy discussions” than any presidential candidate since at least the year 2000, according to a new study published Monday.

The study, conducted by the Wesleyan Media Project, examined political advertising during the 2016 election. Among other conclusions, it found that only 25 percent of Clinton’s ads focused on policy, while over 60 percent were personal, or as the study described, “solely about candidate characteristics.”

Clinton is the only presidential candidate since at least the 2000 campaign, from either political party, to devote less than 40 percent of her television ads to focus on policy. 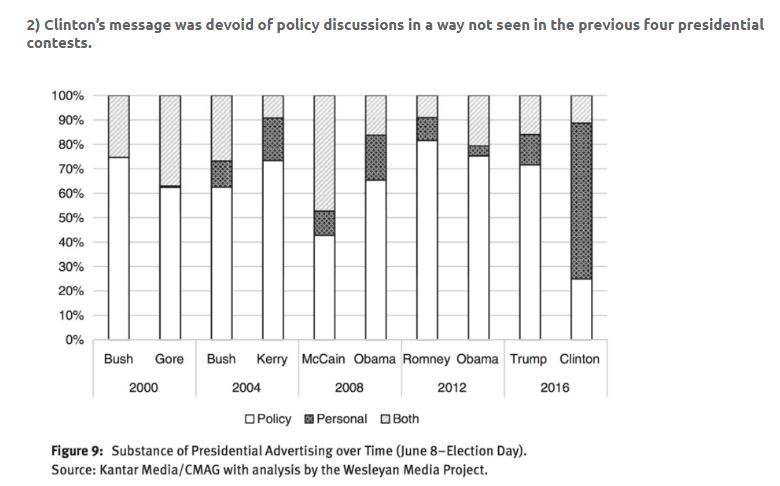 The 60% rate was three times what a typical campaign tends to focus on regarding identity politics. Hillary was mainly focused on blasting Trump as a racist, misogynist, xenophobe (read Deplorable) while offering up the only thing she could offer – being a woman.

By contrast, Donald Trump’s political ads were honed in on policy discussions over 70% of the time. Trump was mainly discussing what he would do as President.

In other words, Hillary had nothing to offer in the way of substance. Trump did.

Yet, if you watched media reports of the two candidates, they were portrayed in the complete opposite manner – Hillary was a policy wonk, while Trump was an insulting blowhard.

Not true, according to science.

A summary of the study said, “Message matters, and a message repeated endlessly does no good unless it resonates with a sufficient number of the right voters.”

“Team Clinton’s message that Trump was unfit for the presidency may not have been enough,” they concluded.

And here, liberals still think she lost because Americans are unfair to women.

Hillary Clinton Tweets Support For Anti-Trump Protesters: ‘This Is Not Who We Are’