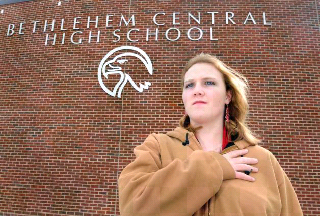 Some hope for our future, but expect the ACLU to file a lawsuit any minute now.

About a year ago, Hannah VanWie was watching a segment on the news about the Vietnam War and talking with her grandmother.

Her grandmother told her about some of the criticism aimed at troops coming back from war.

The topic evolved into patriotism.

“I told my nanny we don’t even say the pledge in the morning at school,” Hannah said.

The 16-year-old Clarksville resident and Bethlehem Central High School student said she wanted to do something about bringing back the Pledge of Allegiance. But she wasn’t sure what, so her grandmother suggested starting a petition.

So Hannah typed up her petition, and hundreds of other students joined her efforts.

A few weeks later, more than 400 of Hannah’s classmates had signed the petition. She sat down with the school’s principal during the spring semester, and school officials agreed to reinstate the daily recitation in September.

Why was the practice of reciting the Pledge abandoned in the first place?

Hannah said Principal Charles Abba told her the reason the practice was discontinued at the high school had something to do with the phrase “one nation under God” in the pledge.

Alec Baldwin Demanded Preferential Treatment Over Sick Woman, “I Don’t Give a ____ If She Has Cancer”

BREAKING News Out Of Oklahoma… THEY GOT THE LAST ONE!!!
AFF

Facebook Twitter WhatsApp Telegram
Back to top button
Close
Right Report
BREAKING NEWS OUT OF TEXAS- THIS IS HUGE!
AFF

BREAKING News Out Of Oklahoma… THEY GOT THE LAST ONE!!!
AFF