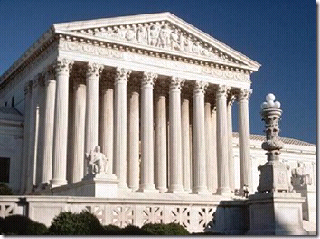 The Supreme Court has upheld a provision in the Arizona Immigration Law known as SB 1070, which allows police officers to check the immigration status of people they stop.

A majority of other provisions in the law were struck down, cited as an intrusion on the federal governments enforcement of immigration.

The Wall Street Journal explains the other provisions which were overturned.

Shane at Caffeinated Thoughts has a copy of the decision, and states in regards to the immigration check victory, the reason the police immigration status check was upheld is because the Court didn’t believe it interfered with the “federal immigration scheme.”

This gives the decision an even greater feeling of being a hollow victory of sorts.  What good is checking the immigration status of those stopped for breaking the law, if it is only reported to the federal government who just recently were instructed to halt deportations of some 800,000 illegal immigrants?

On the plus side, the “show me your papers” provision was the most controversial, as well as the most widely debated and generally understood aspect of the law.

Both sides will likely come away from this claiming victory.

The Supreme Court is expected to rule on Obamacare on Thursday.