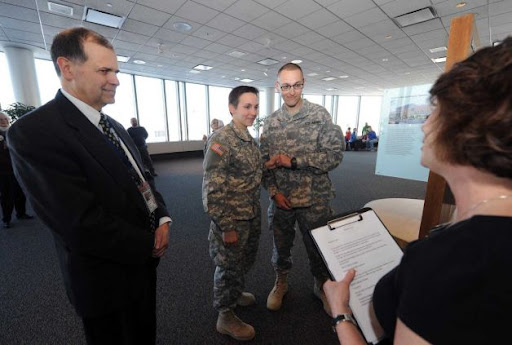 Feel good story for the day…
Two soldiers, Caitlin Murray and Sean Whitney, were waiting at Albany International Airport to board separate flights heading off to their respective military assignments.
Whitney will be deployed in Afghanistan until September of 2015.  Murray was heading to South Carolina for basic training.
The couple decided that before their flights departed, that they would get married right then and there, military fatigues and all.
Via the Times Union:

The groom was similarly dressed.

They decided spur of the moment to get married Thursday at the Albany International Airport after scrambling to secure a marriage license a day after purchasing matching Irish Claddaugh rings.

They faced a tight deadline for their nuptials. Missing their flights was not an option.

Murray had a 2:35 p.m. US Airways flight to catch to Charlotte before completing basic training at Fort Jackson, S.C.

Whitney was booked on a 5 p.m. Southwest flight to St. Louis to finish training at Fort Leonard Wood, Mo. in preparation for deployment to Afghanistan.

When a hastily summoned town marriage officer said. “I now pronounce you man and wife” and the couple kissed, there was warm applause from two dozen strangers and a few airport workers on the observation deck.

It was the first wedding held at Albany International in over 20 years, and likely the first one in which the bride and groom then embarked on separate ‘honeymoon’ destinations.
We look forward to hearing more about the couple when they are finally reunited.
Tags
Afghanistan Albany New York

Teacher Tearfully Opts Out of Common Core Testing, Calls It ‘Cruel and Harmful’

Cuomo and De Blasio Both Busted Stacking Events With Supporters

5 Top Democrats Who Once Cared About Border Security