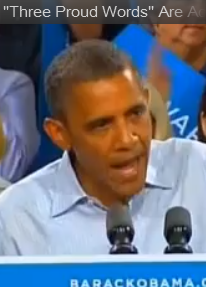 When he’s not travelling the 57 states or spelling out the word ‘OIHI’, the President is busy with his pocket calculator, desperately trying to count out words in a sentence.

Like every president, Barack Obama has his generally-accepted strengths and weaknesses.

His speech-giving ability is, without a doubt, one of his greatest assets, but in Florida over the weekend the man made a mistake almost identical to one made earlier by Vice President Joe Biden.

Speaking to a roaring crowd, the president said American manufacturers are making products that we can sell around the world, stamped with “three proud words.”

What are they?  According to Obama, the “three” words are: “Made in the USA.”

It’s fairly obvious that Obama was trying to go with ‘Made in America’.  Again however I ask, is this something that the media would brush off had it been Paul Ryan, Mitt Romney, or Sarah Palin?  Of course not, it would be used as evidence that the Republican candidate is a dolt who is unfit to lead.