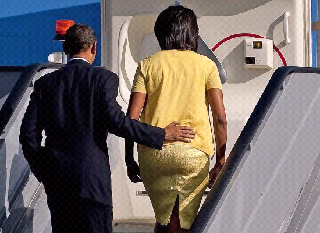 Is there really nothing else of importance going on in the world (h/t Weasel Zippers)?

Can you imagine how the incident would play out if an African American congressman made a crude remark about First Lady Laura Bush’s body? It certainly would have taken more than an insincere apology to wash that sin away. That scenario never happened —hopefully because those congressmen were raised with a measure of common decency. I know that America’s first family – an image this country presents to the world — is traditionally granted a certain amount of respect across party lines.


They are of course referring to Wisconsin Republican congressman Jim Sensenbrenner, who was recently overheard criticizing Michelle Obama’s healthy eating initiative: “She lectures us on eating right while she has a large posterior herself.”

Why would someone be so cruel as to insult the first lady?

Why they’re racist, of course!

Not only is this disrespect crude, it also proves yet again that you can’t go wrong disrespecting a black woman in the United States of America, even if she lives in the White House – and in some constituencies, especially if she lives in the White House. Sensenbrenner’s nasty rant made me sick and sad because it brings to the surface the ugly history of how black women are viewed in America, stereotyped and dehumanized, our bodies everyone’s business except our own.


The article then goes on to paint Sensenbrenner as some sort of psychotic stalker.

What in the world is Sensenbrenner doing staring at the First Lady –not as a person but as a specimen, each part an item on an anatomical checklist? He doesn’t approve of what he’s seeing but he can’t keep his eyes off of her. It’s creepy but unfortunately familiar, the way he devalues black beauty while being mesmerized by it.


I seriously doubt Sensenbrenner is ‘mesmerized’ by Michelle Obama’s backside.

Robert De Niro: “Too Soon” For a “White First Lady”

Jake Tapper is Triggered: Republicans Would Be Rioting If They Saw This Kind Of Convention From Democrats