I found this before and after of Carl Levin (D-MI) rather fascinating.  Essentially, in 2012 he wrote a letter to the IRS urging them to target Tea Party groups for political reasons.  In 1988, he was chastising Republicans for silencing a domestic terrorist for ‘political reasons.’

Letters from U.S. Sen. Carl Levin, a Michigan Democrat, show his involvement in pressing the IRS to target mostly conservative organizations with cumbersome questionnaires seemingly calculated to slow down their applications for tax-exempt status in the middle of an election year.

‘These new documents show that officials in the IRS headquarters were responsible for the illegal delays of Tea Party applications,’ Judicial Watch president Tom Fitton said Wednesday in a statement.

‘The IRS scandal has now ensnared Congress,’ he said.

That claim is a reference to a series of letters from Sen. Carl Levin, a Michigan Democrat who wrote to the IRS in June 2012 to complain about 12 nonprofit groups he wanted investigated for ‘political activity.’

Levin even cited a a 1997 IRS rejection letter to the conservative group National Policy Forum, as an example of how the IRS should be conducting business.

In 1988 however, it was domestic terrorist Brett Kimberlin:

In 1988, Kimberlin made news with accusations that he had sold marijuana to Vice President Dan Quayle in the ’70s.  U.S. Senator Carl Levin (D-Michigan) supported Brett Kimberlin and accused the Bureau of Prisons of trying to silence him by placing him in solitary confinement.  The report (seen below) ran in the Argus-Press on October 4th, 1992.  It makes no mention of Kimberlin as the Speedway Bomber, and in fact only lists him as “a convicted marijuana smuggler”. 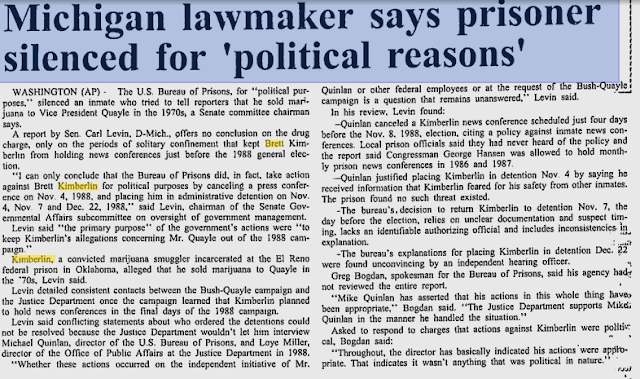 It may be difficult to read, so please click on the link here….

Here is the man Levin thought should not be targeted for political reasons:

Kimberlin is known as the Speedway Bomber, who was convicted in 1981 of a series of bombings that caused extensive property damage, and severely mutilated a man who happened upon one of his explosive devices, eventually leading to the man’s suicide.  Some law enforcement officials believed the bombings were actually an attempt to distract from the murder of an elderly woman in Indianapolis, a crime in which Kimberlin was a suspect.

In Levin’s world, it’s perfectly acceptable to target Tea Party members.  Domestic terrorists, not so much.

You Can Donate To Hillary In Honor Of Bin Laden, But Not Chris Stevens

AOC: Americans Not Eating at Asian Restaurants Because They’re ‘Just Straight up Racist’ About Coronavirus

Feminist Promotes Abortion to Children in Video, Child Asks Why Not Choose Adoption?