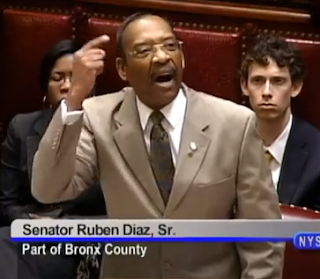 In the video clip below, Senator Ruben Diaz is speaking on the Senate floor regarding New York’s gun control legislation.  He pronounces to everyone that it needs to be made clear – the New York SAFE Act is his party’s legislation, that “it is a Democratic bill”.

Diaz says that he is voting for the bill despite this:

“Yet knowing … knowing, ladies and gentleman, knowing that even though voting for this … to give opportunity for crime to come down … I know, and you should know, that this will not make a difference in (ending) committing crime.”

Why pray tell, would somebody vote for a piece of legislation that they fully admit will not make an ounce of difference in stopping violent crime?

Diaz adds later in the clip:

Worse, Diaz isn’t saying this because he is begrudgingly going along with his party on the matter, he is saying it because he believes the bill isn’t strong enough in limiting gun access.  Earlier we reported on another Democrat who believed the legislation did not go far enough, even citing some who wish for “one gun with one bullet”.

Diaz though, doesn’t seem to trust his own mind, as he runs down a litany of reasons why crime is being committed for other reasons:

Well said, Mr. Senator.  Problem is, you now want to do more ‘nothing’ regarding crime.

That ‘nothing’ however, does actually turn into a ‘something’ for law-abiding citizens.  While criminals will see no effects from this bill, regular gun owners will see their rights greatly diminished.

You talk common sense, Mr. Diaz.  Too bad you and your cohorts don’t govern the same way.

Weiner Looking to Thrust Himself Into the NY City Mayoral Race?

Derek Jeter Gets a Visit From George W. Bush at His Final Game In Texas