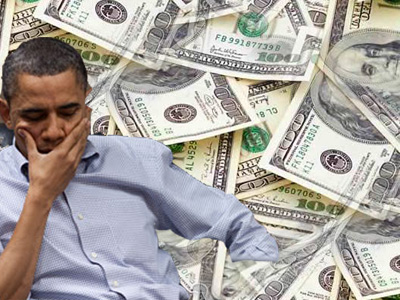 Over the last few days, the internet has been abuzz with the possibility that the Obama campaign was about to be nailed with a major foreign donor scandal, with some even speculating that the President was so distracted by the pending story, that it contributed to his horrible debate performance.

President Obama’s reelection campaign, rattled by his Wednesday night debate performance, could be in for even worse news. According to knowledgeable sources, a national magazine and a national web site are preparing a blockbuster donor scandal story.

The campaign tried desperately to block the story, indicating its importance.

Now, the Government Accountability Institute (GAI) has released the report that shows the campaign has been using social media portals to solicit foreigners for donations, using data mining techniques to gain information about people who may not have actually visited the campaign site, and even operating a website for internet users outside the United States.

This, to put it mildly, would be a violation of federal election laws.

The Daily Caller reports (emphasis mine):

President Barack Obama’s re-election campaign has been soliciting foreigners for donations, an explosive report from the conservative Government Accountability Institute (GAI) shows. Those foreign donors are allegedly visiting the Obama campaign’s donation solicitation Web pages through a social media website the campaign controls, and through an outside website that serves mostly Internet users from outside the United States.

About 20 percent of visitors to the “my.barackobama.com” social media website “originated from foreign locations,” the report found. That Web address is owned and controlled by the Obama re-election campaign.

“At no point during the [website’s] subscription process is a visitor asked whether he or she can legally donate to a U.S. election,” GAI notes.

The report adds that once a visitor signs up for the website, they are immediately solicited for campaign donations.   “In fact, numerous foreign nationals report receiving solicitation letters and thank you emails from the campaign for their support.”

They also add that the campaign site employs various techniques to mine e-mail and other data from “friends and associations” of members of the site.  An example:

Neither President Obama nor his campaign owns Obama.com. Sukhia said data show that 68 percent of traffic to that website comes from foreign users, all of whom are redirected to Obama fundraising Web pages.

Obama.com was registered in September 2008 to Robert Roche, an Obama campaign bundler living in Shanghai, China, according to GAI.

“By October 2, 2008, Obama.com began redirecting all visitors to specific content on my.barackobama.com,” GAI wrote. “Upon arrival to my.barackobama.com, visitors were asked for their name, email, and zip code and presumably were sent solicitation letters, like every other visitor who provides that information to the campaign.”

The report then goes on to demonstrate other tactics that the websites use to gather information, such as e-mail addresses, and continues to redirect viewers to the campaign donation web page.

The donation web page seems to be the crux of the foreign donations activity.

For instance, the campaign website has disabled industry standard credit card verification methods, eliminating the necessity to provide the Card Verification Value (CVV) code on the back of a credit card.  The Mental Recession reported on this several months ago, as conservative bloggers were easily demonstrating that the Obama campaign websites were allowing very real donations from some very fake names – Nidal Hasan and Hitler as an example.

Some in the media were pointing out this tactic all the way back to the 2008 presidential campaign, oddly enough spurred on similarly by a record breaking fundraising overhaul reported in September.  Back in 2008, Obama had raked in $150 million.  This September, $181 million, a massive increase from the donations submitted to his campaign the previous month.  The release raised eyebrows, as it was announced quietly via Twitter on a Saturday morning, when it clearly should have been touted as a news story to energize his base.

What’s more, a vast majority of those donations – 98% – are not required to be reported, leaving the door open to the possibility that multiple millions in donations were generated from illegal foreign entities.

It shall be unlawful for –

(1) a foreign national, directly or indirectly, to make –

(A) a contribution or donation of money or other thing of

value, or to make an express or implied promise to make a

contribution or donation, in connection with a Federal, State,

(B) a contribution or donation to a committee of a political

The President himself has griped about American elections being bankrolled by foreign entities.  Here is an excerpt from his 2010 State of the Union address (video below):

“With all due deference to separation of powers, last week the Supreme Court reversed a century of law that I believe will open the floodgates for special interests –- including foreign corporations –- to spend without limit in our elections. I don’t think American elections should be bankrolled by America’s most powerful interests, or worse, by foreign entities.”

Hypocrisy, thy name is Obama.

The media and the voters didn’t seem to care about these illegal tactics in 2008, will it matter this election?

Are You a Racist? Watch This Video And Find Out

Romney: “Look to Poland” as a Way Out of Economic Crisis

Poll Results: Who Do You Trust More With the Economy? You Won’t Believe the Results

Communist Party Leader (2009): “There Could Not Be a Better Time to Be Communist in USA”