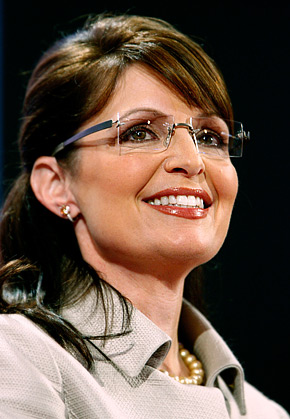 What does it say when the woman that libs like to portray as incompetent, can easily poke holes in the administration’s talking points and consistently rip him a new one?  It says there is a dolt in the conversation, but their name isn’t Sarah.

The far Left continues to believe American voters are not smart enough to grasp the diversionary tactics it employs to distract us from the issues our President just doesn’t want to talk about – issues that affect us all every day and must be addressed.
Exhibit A in these diversionary tactics is an absurd new attack ad President Obama has released taking my comments out of context. I’m not running for any office, but I’m more than happy to accept the dubious honor of being Barack Obama’s “enemy of the week” if that includes the opportunity to debate him on the issues Americans are actually concerned about. (Remember when I said you don’t need a title to make a difference?)
Just off the top of my head, a few of these concerning issues include: a debt crisis that has us hurtling towards a Greek-style collapse, entitlement programs going bankrupt, a credit downgrade for the first time in our history, a government takeover of the health care industry that makes care more expensive and puts a rationing panel of faceless bureaucrats between you and your doctor (aka a “death panel”), $4 and $5 gas at the pump exacerbated by an anti-drilling agenda that rejects good paying energy sector jobs and makes us more dependent on dangerous foreign regimes, a war in Afghanistan that seems unfocused and unending, a global presidential apology tour that’s made us look feeble and ridiculous, a housing market in the tank, the longest streak of high unemployment since World War II, private-sector job creators and industry strangled by burdensome regulations and an out-of-control Obama EPA, an attack on the Constitutional protection of religious liberty, an attack on private industry in right-to-work states, crony capitalism run amok in an administration in bed with their favored cronies to the detriment of genuine free market capitalism, green energy pay-to-play kickbacks to Obama campaign donors, and a Justice Department still stonewalling on a bungled operation that armed violent Mexican drug lords and led to the deaths of hundreds of innocent people.