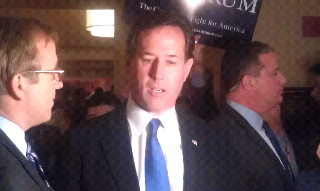 Follow the bouncing ball. Former U.S. Senator Rick Santorum has now bounced to a 12-point lead over Mitt Romney in the race for the Republican presidential nomination.

The latest Rasmussen Reports national telephone survey of Likely Republican Primary Voters finds Santorum with 39% support to the former Massachusetts governor’s 27%. Former House Speaker Newt Gingrich follows from a distance with 15% of the vote, and Texas Congressman Ron Paul runs last with 10%. Three percent (3%) like some other candidate in the race, and six percent (6%) are undecided.

Just over a week ago, it was Romney leading the pack with 34% after his win in the Florida Primary, followed by Gingrich 27%, Santorum 18% and Paul 11%. But then last week Santorum swept GOP caucuses in Colorado and Minnesota and a non-binding primary in Missouri as Gingrich continues to stumble in the race to be the conservative alternative to Romney.

I’m still trying to figure out how Romney won the CPAC straw poll this weekend.  He is ‘severely’ behind Gingrich in conservative values, who in turn ranks behind Santorum.

What if Spongebob Characters Played in Classic Movies?