In a series of since-deleted tweets, Roseanne Barr relayed her emotions over the cancellation of her show, explained the chain of events that led to it, and addressed co-stars who had publicly called her out over her actions.

Barr was seen publicly for the first time since her show was dropped by ABC executives after an ill-advised tweet comparing former Obama adviser Valerie Jarrett to Planet of the Apes.

The Daily Mail asked the comedienne her thoughts on the controversy surrounding her show, to which she replied simply: “I believe in one law for all people, I love all people have a nice day.”

But Barr had a lot more to say on social media, using her usual eccentric flair in tweeting thoughts on the matter then later deleting them.

It is clear from her comments that she is distraught over the loss of her incredibly successful remake of “Roseanne,” often getting emotional by saying she “begged” for ABC to keep the show going, “begged” for people to keep their jobs and later wondering, “Will I ever recover from this pain?”

Whatever you think of her comments, it’s quite clear from Barr’s version of events and the fact that the cancellation took place within hours of the controversy, that ABC executives don’t subscribe to forgiveness and second chances. She was going to be fired no matter what she said. 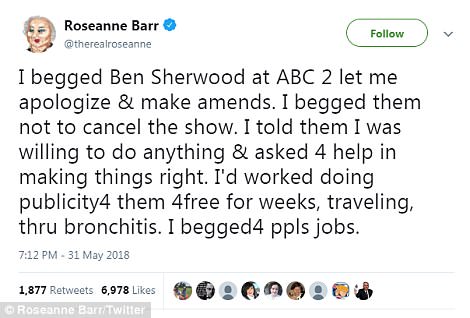 “I begged Ben Sherwood at ABC 2 let me apologize & make amends,” she wrote. “I begged them not to cancel the show. I told them I was willing to do anything & asked 4 help in making things right … I begged 4 ppls jobs.” 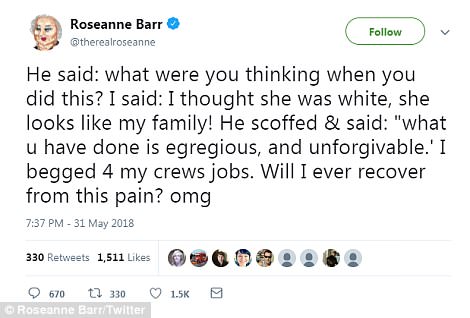 “He (Sherwood) said: what were you thinking when you did this?” she continued. “I said: I thought she was white, she looks like my family! He scoffed & said: ‘what u have done is egregious, and unforgivable.’ I begged 4 my crews jobs.”

She would later ask, “Will I ever recover from this pain?”

Roseanne also took time to address her co-stars Sara Gilbert and Michael Fishman, both of whom publicly commented on the controversy.

Roseanne’s recent comments about Valerie Jarrett, and so much more, are abhorrent and do not reflect the beliefs of our cast and crew or anyone associated with our show. I am disappointed in her actions to say the least.

You fought, built, and designed Roseanne for inclusiveness. That is why yesterday was so out of character with the last 30 years. It was in your hands from the beginning to the end. No one can deny that

“To Michael Fishman and Sara Gilbert,” she wrote. “I forgive u both, love u both, just wish u could have called me personally 2 talk rather than do it in a public arena. I understand, tho. It’s ok.”

Barr would end the twitter barrage by stating she would be taking another social media hiatus.

“I end by offering everyone involved one more apology and prayers for healing of our divided nation,” she said.

“Signing off twitter for a while. Love u guys!”

Are you upset over Roseanne’s show being canceled? Is there a double standard in Hollywood? Share your thoughts below!

McEnany: Trump’s Police Reform Is Doing What Obama and Biden Couldn’t Get Done in Eight Years

IT’S HAPPENING: Obama Just Made His Big Move on Gitmo