There is, understandably, plenty of outrage today after hearing MSNBC host Touré accuse Republican presidential candidate Mitt Romney of what he called the “niggerization” of President Obama.

MSNBC’s Touré … has now declared that Mitt Romney is engaged in the “niggerization” of Barack Obama. What exactly did Romney do to earn this reprehensible slur? He said that Obama, whose campaign has already called Romney a racist, a sexist, a felon, and a murderer, should “take [his] campaign of division and anger and hate back to Chicago.”

Why, precisely, did this comment constitute “niggerization,” and what did that vile word mean? Why was Touré invoking one of the most egregious slurs ever to enter the language? Well, let Touré explain:

“That really bothered me. You notice he said anger twice. He’s really trying to use racial coding and access some really deep stereotypes about the angry black man. This is part of the playbook against Obama, the ‘otherization,’ he’s not like us.

“I know it’s a heavy thing, I don’t say it lightly, but this is ‘niggerization.’ You are not one of us, you are like the scary black man who we’ve been trained to fear.”

Appropriately, the level of disgust for such an outrageous slander has been great.  But there is one person who may believe Romney got off relatively easy for being accused of the “niggerization” of one man.

So was it some hack blogger on the left who used such terminology?  Nay.

Bush was accused of promoting the “niggerization of the American people” by frequent guest of the Bill Maher Show, host on CNN, C-Span and PBS, and esteemed Professor at the University of Princeton, Cornel West.

In a piece for the Atlantic, West wrote:

Since the ugly events of 9/11, we have witnessed the attempt of the Bush administration—with elites in support and populists complacent—to promote the niggerization of the American people. Like the myopic white greed, fear, and hatred that fueled the niggerization of black people, right-wing greed, fear, and hatred have made all of us feel intimidated, fearful, and helpless in the face of the terrorist attacks. And, as in the 19th century, we’ve almost lost our democracy.

Additionally, West can be seen in this video comparing the backdrop of the Attica Rebellion to attitudes fostered by the ruling government party after 9/11.

West:  The Attica Rebellion was a counter move in that direction – I call it the “niggerization” of a people.  Not just black people because America been “niggerized” since 9/11.

Is it any wonder that Touré has referred to Professor West as a “genius”? 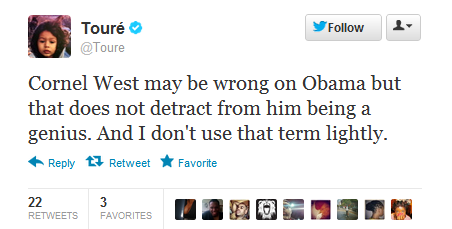 But let there be no doubt which side of the aisle the true racists sit.

Toure says Romney’s tactics are the “niggerization” of Obama. I take HUGE issue with that term and accusation, as someone with intimate knowledge of racism.