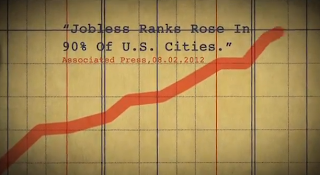 Citing an AP report that unemployment rates were higher in nearly 90% of cities in America this past June, the Romney campaign is hitting Obama with a new ad simply stating, “It’s just not getting better”.

A spokesman for the Romney camp stated:

“Under President Obama, our economy is just not getting better. Mitt Romney has a plan to build a stronger middle class with more jobs and more take-home pay. That’s the type of leadership we need.”

Watch the ad below…