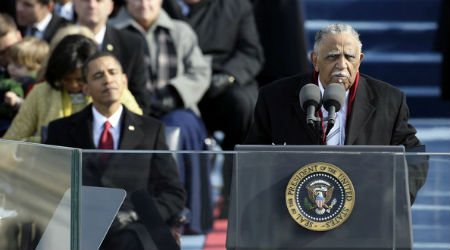 Via the Georgia Tipsheet:

The man who delivered the benediction at President Barack Obama’s 2009 inauguration said that he believes, as he once did in his “militant” youth, that all whites are hell-bound.

The Rev. Joseph Lowery, a patriarch of the civil rights movement and close ally of the president, said at a weekend rally in central Georgia that the “level and hatred and bitterness” borne of this election had made him a believer that whites were going to hell.

Lowery said, according to the Monroe County Reporter, it was the same belief he held at the height of the civil rights movement. Eventually he mellowed, believing that not all whites, rather only “most,” would get their brimstone comeuppance.

“Now,” the local newsweekly reported, “he is back to where he was.”

So the man went from delivering the benediction for the post-racial President, to four years later rekindling a previously held belief that all whites were Hell-bound?

In other words, the most racially polarizing Presidency in modern history turned a mellowed out racist back into being a hardcore racist.

Read the rest of the report to see some more controversial comments from the reverend.

Mayor of Venice: Anyone Shouting ‘Allahu Akbar’ In His City Will Be Shot