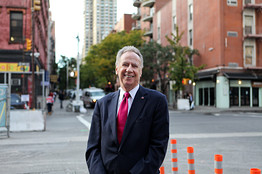 At the site, where 25 years earlier he launched the Doe Fund, George T. McDonald today officially announced his candidacy for Mayor of New York City at Grand Central Terminal.

Joined by his wife Harriet and dozens of supporters, McDonald officially kicked off his campaign with a pledge to address the City’s stubbornly high unemployment.  McDonald said, “We have a jobs crisis in this city and that’s why the central promise of my campaign is simple, we must set as a goal the full employment of every resident of our great city. Every New York City resident who wants a job should have one. “

Harriet and George McDonald built The Doe Fund from nothing except their bedrock belief that in America anyone can climb the economic ladder if given an opportunity and a paying job. Today, The Doe Fund is a $50 million a year enterprise that has helped tens of thousands to get jobs and reclaim their lives.

McDonald said, “By establishing the same type of innovative solutions that I have pioneered at the Doe Fund, we can empower the ‘47 percent’ and realize our goal of full employment.”

He added, “This is the most important election in twenty years.  There are those who want to harken back to the divisive policies of the past and there are those who would turn our city over to the unions and special interests, New Yorkers deserve new common sense solutions.”

McDonald concluded, “I am running for mayor because I believe we can make this a better city – keeping our streets safe, making our schools better and creating jobs.  Together we will keep New York a beacon of hope and opportunity for all…”

Fracking Decision in New York Could Be Made in Weeks

Poll: Of Those Who Would Like to Kick A State Out of the Union, 25% Choose New York