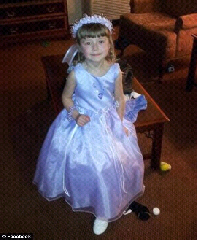 In related news, had this happened to a suspicious looking person who fit the profile of a radical terrorist, CAIR, the ACLU, Al Sharpton, and Jesse Jackson, would all be demanding that the TSA agents be fired.

But including four-year-olds in intense security screenings just to prove political correctness is perfectly acceptable.

This story is disgraceful on so many levels…

Of all the many complaints about airport security and the TSA, one of the most common is that they make little distinction between plausible security threats and passengers unlikely to be doing anything wrong.

And a recent incident in Wichita, Kansas has reinforced that argument, as a four-year-old girl was apparently subjected to a humiliating ordeal after she hugged her grandmother while she was waiting in line.

The girl was accused of having a gun and declared a ‘high security threat’, while agents threatened to shut down the whole airport if she could not be calmed down.

When asked about the overbearing treatment the girl received, a TSA spokesman did not apologise and insisted that correct procedures had been followed.

A description of the incident provides no further comfort for those wondering if this is being blown out of proportion.

Apparently the family’s grandmother had triggered an alarm on the airport security system.  She was subsequently held back, and in the confusion the little girl ran back to give the grandmother a hug.

That’s when things got a little crazy, with TSA agents accusing the grandmother of passing a gun to the child, then proceeded to take their anger out on that child.

In her terror, Isabella tried to run away rather than face a full body pat-down, which unsurprisingly enraged the TSA officers further.

One officer even told the girl’s mother that the airport would have to be shut down and every flight cancelled if the four-year-old did not co-operate.

They also apparently described the little girl as a ‘high security threat’.

As Isabella was taken into a side room for a pat-down, accompanied by her mother, she could not stop crying and refused to let the agents touch her.

An officer repeatedly said she had ‘seen a gun in a teddy bear’ in the past, in an apparent attempt to justify the situation.

Ms Brademeyer continued: ‘The TSO loomed over my daughter, with an angry grimace on her face, and ordered her to stop crying.

‘When my scared child could not do so, two TSOs called for backup saying, “The suspect is not cooperating.” The suspect, of course, being a frightened child. They treated my daughter no better than if she had been a terrorist.’

And yet, treating a possible terrorist as a terrorist would be branded bigoted or Islamophobic.