Mnuchin Jokes That Greta Thunberg Should Get An Education, Then Talk

CNN Analyst Joe Lockhart: Yea, I Made Up That Conversation Between Two GOP Senators – So What?

Man Who Paid off Student Loans Confronts Sen. Warren over Her Plan to Help Those Who Weren’t Responsible

While many Donald Trump supporters were upset upon learning that the President-elect was backtracking on a campaign promise to investigate Hillary Clinton’s private email scandal, they’ll be plenty pleased with a new report which indicates he’ll actively pressure foreign states to investigate the Clinton Foundation.

The explosive report from the New York Post indicates that ambassadors named to Trump’s administration will be instructed to bring up the foundation with foreign governments — and pressure them to probe its ­financial dealings.

Trending: CNN Analyst Joe Lockhart: Yea, I Made Up That Conversation Between Two GOP Senators – So What?

There has been a new twist in the investigation into the Bill, Hillary and Chelsea Clinton Foundation, Sandra Smith reported.

While President-elect Donald Trump has now promised not to personally dig into the scandal-scarred organization, a new report from the New York Post says that he will instead ask his new ambassadors to aid in the probe.

Ambassadors to certain countries may be asked to pressure the governments which which they are the liaison to commence their own investigations into their relationships with the foundation.

The countries of Haiti and Colombia lead the list of those investigated because of the amount of money the Foundation made off of the Haitian earthquake and a Columbia mining tycoon, respectively.

Even ABC News conceded that the “correspondence offers a glimpse into the first stages of a $10 billion Haiti recovery effort” and “appear to show a State Department process that at times prioritized — and, some argue, benefited — people with close ties to the Clintons.”

As for Columbia, the Post reports “Canadian mining magnate Frank Giustra pledged $100 million to the foundation in 2005 and later benefited from the foundation’s philanthropic work in the country, where he acquired large parcels of land and set up an oil business, ­according to watchdog groups.”

The Foundation has also “received millions from dozens of foreign governments including Saudi Arabia, Kuwait, the Netherlands, Canada, Sweden and Ireland.”

Previous post Colin Kaepernick Praises Castro, Then Gets Hammered In Loss By Son of a Cuban Immigrant 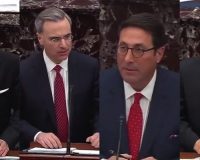