Regardless of your politics, if somebody calls 911 and says that a man at a polling station has told you to leave because he has a gun, is it not mandatory that the police arrive as soon as possible to check on the situation?

Not in Detroit apparently… 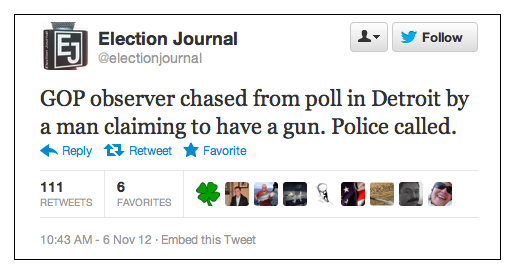 Then, the followup – Via Michigan GOP (h/t Weasel Zippers):

This morning, a legally credentialed poll watcher was threatened and intimidated while attempting to perform his legally allowed duties of observing the election process at precinct polling location 289 in Detroit.

The poll watcher, a lawyer, was confronted by a voter in line, who demanded the poll watcher produce his credentials, which he did.

However, the voter said that wasn’t good enough and that he had “a badge and a gun” and told the poll watcher get out of the precinct.

Rather than allow the situation to escalate, the poll watcher left before the voter produced a badge or brandished a gun.

Fearing for his safety, the poll watcher exited and called 911, however the Detroit Police refused to respond to the call – neglecting the fact that a voter alleged to have a ‘badge’ and a ‘gun’ in a precinct, putting other voters at risk.

Let’s hope the one doing the threatening wasn’t actually a police officer.

Former Staffer Doubles Down on Ron Paul as Conspiracy Theorist