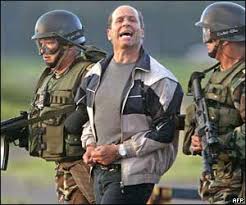 As if you needed another reason to dread a second Obama term, along comes a report that the President’s administration is set to release two convicted terrorists … after the election.

Media outlets in Latin America are reporting that the United States is likely to release two convicted Colombian terrorists, but only after the November 6th Presidential Election.

Colombian newspaper El Espectador (The Spectator) reported on October 19 that the United States and Colombia are in “advanced” talks about releasing Ricardo Palmera and Nayibe Rojas Cabrera to Colombia where they would likely be  freed.  To our knowledge, no U.S. media outlet has reported on any of this as of yet.

Ricardo Palmera, who is best known by his nomme de guerre “Simón Trinidad” is a high-ranking rebel leader and former finance director of the leftist Colombian insurgent terrorist organization FARC (Revolutionary Armed Forced of Colombia), which is responsible for thousands of kidnappings and murders in Colombia, including businessmen, politicians, women, children, and even a female presidential candidate.

Read the rest of the in-depth report here…

Obama’s flexibility after the election should frighten every one.

Here is an unofficial tally of things that will come to pass after November 6th.

Who Better to Chair a Panel on Genocide Than a Woman Who Wanted to Invade Israel?