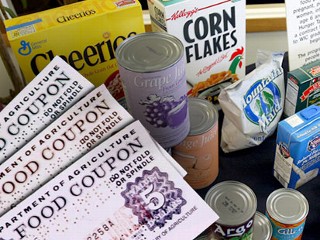 There’s a joke in here somewhere, I just know it.  But this report doesn’t put me in a jovial mood.

“Additionally, its investigation revealed 7,236 people in these states are receiving duplicate benefits, while 286 are on state lists that should exclude them from receiving food stamps,” the report said, amounting to $1.4 million in unnecessary payments each month, or $147.03 for each recipient, dead or alive.

Read more about the report to also learn how food stamp recipients are qualifying by having the cost of marijuana deducted from their income.  Seriously.

Also, had to share this joke from one of the commenters.

I took my dog down to the welfare office to sign him up for Food Stamps. The lady said he couldnt get food stamps “cause he is a dog”.

I told her he qualifies for the following reasons (1) He doesn’t work, just lies around the house all day. (2) He doesn’t know who his daddy is. (3) He likes anybody that feeds him. She checked her book, he gets his stamps next Monday and his Democrat voter registration pack came in today.

Giuliani to Obama on Iran Deal: You Can’t Negotiate With A Madman