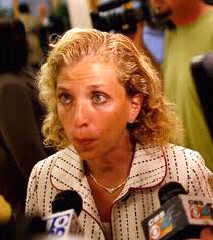 Sure that’s a bit of a shocking headline, but we learned over-the-top bombastic statements from the Democrats themselves – specifically, DNC Chair, Debbie Wasserman Schultz.

DWS recently accused the Republicans of having “fully embraced extremism”.  So when Democrats last month reached across the aisle with their Republican counterparts to defeat President Obama’s budget by a vote of 414-0, it stands to reason that they were also ‘fully embracing extremism’.

Extremists as you know, have a propensity for violence, a willingness to kill.  In this case, it just happened to be the Obama budget proposal that fell victim to an attack by House member extremism.

So why provide this handy reminder for the radical left?

Because Debbie Wasserman Schultz seems to have already forgotten this case of budgetary violence in her extremist past.

Maggie Thurber points out that a little noticed aspect of an interview with Fox News Bret Baier, includes DWS placing blame for the strangling of Obama’s budget solely on the lap of Republicans.  Trying to pawn that vote off on Republicans appears to be blowing up in her face however.

As Thurber points out, Democrat extremists also took part in the murder…

Baier, noting that Democrats have gone out of their way to criticize the budget presented by Rep. Paul Ryan (R-WI), said there was no Democrat budget on the table.

“That’s right, because House Republicans voted it down,” she said.

It wasn’t just House Republicans who voted it down – not a single Democrat voted for it, including Wasserman Schultz herself!

A statement addressing the budget vote from the Karen Harrington for Congress website adds:

Interestingly enough, and somewhat shocking, Obama’s Cheerleader-in-Chief, DNC Chair/Congresswoman Debbie Wasserman Schultz was present for the vote, and voted a resounding ‘Nay’ to the measure.

Yes, you read correctly, Debbie voted against her boss’ budget.

Thurber asks, “Hypocrisy, lies,distortions …how does she live with herself?“

U.S. Agrees to Release Taliban Prisoners Because They Promise to Start a Peace Office