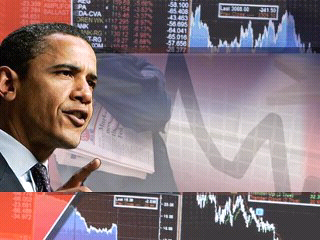 Obama reportedly set to blame the results of the study on Bush.

Most of the soaring $1 trillion federal deficit is the blame of President Obama’s spending and political deals according to a pro-Obama think tank that pegged former President George W. Bush’s responsibility at just 35 percent.

While opening its analysis by blaming Bush and showing pictures of Senate GOP leaders, the Center for American Progress said that the other 65 percent of the deficit surge came on Obama’s watch, a combination of high spending, extension of the Bush tax cuts and additional defense spending.

“The analysis reveals that events that occurred before January 2009, including the onset of the Great Recession and increased spending—especially on the wars in Afghanistan and Iraq—attributed to 35 percent of the swing from surplus to deficit,” said the center founded by long-time Obama advisor John Podesta.

“The remainder of the deterioration did happen after 2009…”

File that under ‘duh’.

To be sure, Bush is not without blame for abandoning free-market principals, but Obama’s European-style socialism has made the economy infinitely worse.

Video: Is This Man Seriously the Leader of the Free World?

Tough Night – Obama Loses Over 40% of the Vote to “Uncommited”