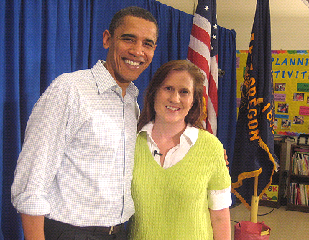 You’d think an image of a man violently covering a frightened woman’s mouth, accompanied with the words, “He’s decided to become a father…right-wing Republicans want to make sure he does”, would be considered mildly extreme, right?

Progressive blogger Erin Kotecki Vest posted the photo on her Facebook page. When asked if she was saying that the GOP condones rape, she replied: (and gave her permission to be quoted)

Vest doesn’t come out directly to confirm what the photo says, side stepping that obvious reality by saying that the GOP is making sure rapists become fathers. By any standard, this is not low. This is disgusting.

The group that created the image, and the group that Vest is promoting and in agreement with, also features an image on their Facebook page which reads:

Woman is legitimately raped
Woman gets pregnant
Woman has baby

Do you think the rapist deserves visitation rights?

It is an incredible leap of logic to travel in one’s mind from a pro-life platform to an assertion that Paul Ryan wants rapists to have visitation rights.

The fact that Vest is peddling such ridiculous imagery is important.  Aside from being a prolific blogger for the Huffington Post, she also serves as Social Media Director for BlogHer, Inc., an organization that President Obama recently spoke to.

Vest can also be seen on the Barack Obama campaign website, touting the President’s healthcare reform. Her blog posts demonstrate that she is a leader and contributor for the organization Parents For Obama.

While re-posting an image on Facebook does not translate to supporting the message, Vest has doubled down by writing, “the GOP is making sure rapists become fathers”.

This is unhinged thinking befitting of a typical lefty blogger, but perhaps less so for the Social Media Director with a significant organization.  And worse, a woman featured on the Obama campaign website as a supporter of the President, and leader of the group Parents For Obama.

Newsweek Calls Romney a Wimp, Seemingly Forgetting Who is Currently in Office

Islamic Organization With Terror Ties Complains About – and Successfully Shuts Down – Event Celebrating the U.S. Constitution