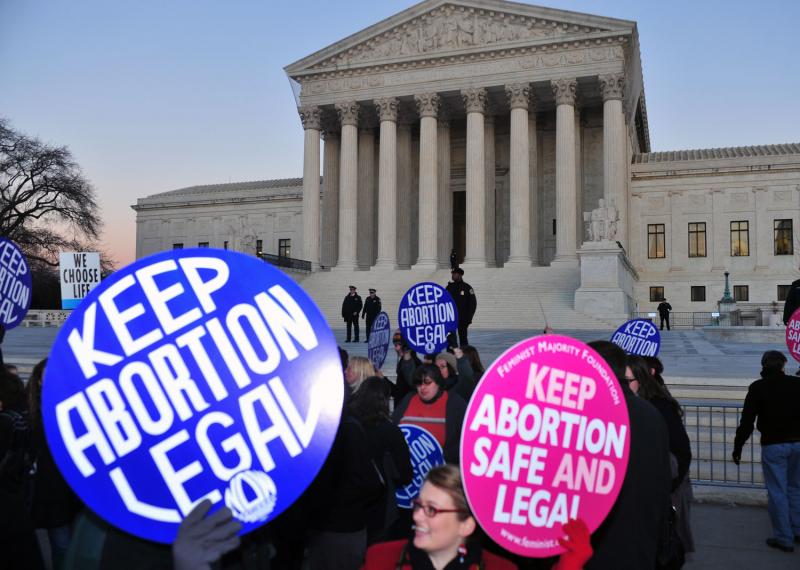 Why is it that The Right is described as “anti-choice” when The Left is talking about abortion?  But The Left is not regarded as anti-choice when they talk about gun control?  When The Left talks about “saving just one life” by doing things like banning guns, why doesn’t that logic apply to late term, partial birth, or any abortion?

Have you ever seen an Intact Dialation and Extraction procedure?  There is absolutely no denying that what the doctor is doing is killing a viable human life.

Let me be clear on this, I believe an abortion, in 99% of cases, is a disgusting and vile act.  I believe that more times than not, abortion is simply a method of last resort at birth control.  I believe that the same logic a woman uses to kill her child in her womb, could be extrapolated into killing a child, or an adult, at any age.  I believe that if a person is capable of the reasoning required to destroy the potential of a human life at one stage of development, they possess the same process of reasoning required to destroy life at any stage.  I believe this, because in my belief, there is no difference between the living potential of the fetus or that of the born child.  But those are my beliefs.

Fortunately for the supporters of Roe v. Wade, I also believe that my beliefs should not dictate the choices of others.

That being said, I am in favor of a woman’s right to do what she thinks is right with her body.  But why does the “pro-choice” Left change their logic completely when they turn their attention to gun control measures?  The apparent argument is that a woman does not affect anyone but herself when she decides to have an abortion.

With that argument in mind, I’ll draw your attention to the more than 54 MILLION abortions in this country since Roe v. Wade. Outside of major world war, there has never been a more prolific assault on innocent human life, in mankind’s history.  (Unless of course, you count the ultimate Leftist idea… communism… which ranks in at an estimated 100 million killed.  Stalin killed more than 40 million personally.)

Let’s consider the possibility that only 50% of these aborted lives would have wanted to live, had the choice been given to them instead of their mother (a very, very generous number given for the sake of making a point).  Let’s then assume merely 1% of the fathers of these unborn children would have opted to be fathers had they had the choice (again a very generous number).  We come up with a number of around 28 million innocent lives affected by abortion (affected being an understatement of astronomical proportions).

28 million lives, and I think we can all agree, that’s a very generous number, given that I have never actually met a suicidal infant or toddler.  I’ve rarely ever met a suicidal adult.  28 million people that would be alive today, had the choice been given to them.

54 million, incidentally, is almost as many as the total dead in World War 2, yet the same “anti-war” Leftist are the same people at the pro-choice rallies.

Given the Left’s logic, it would seem gun control as a vehicle to public safety, or as an avenue to protecting the rights of individuals, pales in importance to overturning Roe V. Wade.  Using the Left’s logic, and obvious disregard for an individual’s constitutional rights, I’d say there’s a fair chance overturning Roe V. Wade is a very worthy endeavor, as well as a real possibility.

Clearly the Left is attempting to demonstrate how important protecting innocent lives are, and how much the public supports this. Perhaps we should start showing more people what a victim of an abortion looks like.  Maybe if more people see that these beings are not merely “aborted fetuses”, but rather viable human lives with incredible potential, much the same way the media recently portrayed all the victims of Sandy Hook, perhaps then, more of mainstream America might see the abhorrent things we have been doing to innocent life since Roe. V. Wade.