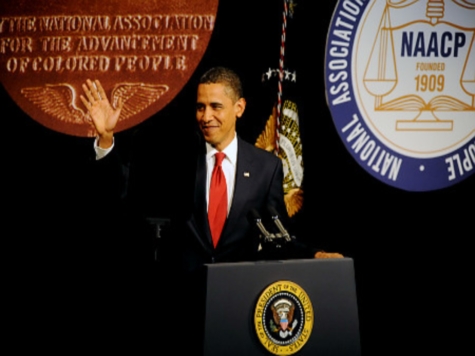 Apparently, an official from the NAACP wasn’t about to support the Obama campaign effort, because he didn’t feel that the President’s policies best represented the black community.  And with African-American unemployment at record levels, especially at the youth range, who could blame him?

Obama official Louis Raymond didn’t take kindly to the lack of support, replying essentially with ‘we know where you live’.

A police report was filed.

The Illinois political director of President Barack Obama’s campaign allegedly threatened a Chicago NAACP official because he did not support Obama’s reelection campaign.

David Lowery, the president of the South Suburban Branch of the NAACP, alleged to CBS Chicago that Louis Raymond, the Obama official, threatened him during a phone call because Lowery did not support Obama. Lowery felt Obama did not adequately address the concerns and issues of the black community.

“You know what?  I know everything about you,” Raymond allegedly said, according to Lowery.  “We’ve been watching you, and since you don’t support Obama, we’ll deal with you.”

Lowery filed a report with local police “in case something happens.”

The Obama campaign has dismissed the accusation calling it a “miscommunication”.

If true however, why would the campaign be so desperate to garner the support of one particular NAACP official?  Democrats traditionally enjoy roughly 90% of the black vote.  Are they concerned that the economy as well as the President’s support for gay marriage could cut into those numbers?

Over the last several months, Mitt Romney has been accused several times of pandering to the white vote, trying to get as many white people to vote for him as possible.

Is this more proof that the Obama campaign is doing the same with black voters?

Weekend Recess: Watch This Anchorman Ask the Meteorologist to ‘Canoodle’ With Him on Live Television

Republican Internal Polling Has Romney Up in Ohio, Iowa, New Hampshire, Tied in Pennsylvania and Wisconsin